Emergencies Act Inquiry Delayed Until October Due to Commissioner’s Illness 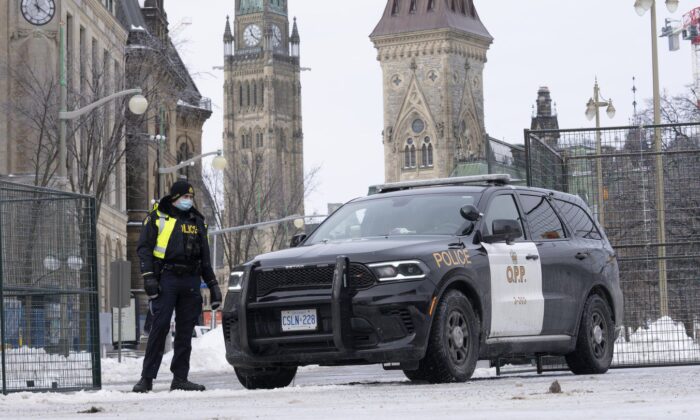 A police officer stands at a checkpoint near Parliament Hill on Feb. 23, 2022 in Ottawa. (The Canadian Press/Adrian Wyld)
By Noé Chartier

The commission tasked with reviewing the Liberal government’s unprecedented use of the Emergencies Act last February said today the hearings will be postponed due to the commissioner having a health issue.

The Public Order Emergency Commission was due to begin its public hearings on Sept. 19. The date has now been moved to Oct. 13.

Inquiry officials said in a statement that Commissioner Paul Rouleau is required to undergo surgery “to address a health issue that has very recently arisen.”

“I want to assure Canadians of my commitment to completing the work of the Commission in a timely manner,” Commissioner Rouleau said in the Sept.2 statement.

“Commission staff, with the cooperation of all parties, has made significant progress over the past several weeks in obtaining and reviewing documents, conducting interviews, and preparing for the start of public hearings.”

The Liberal government invoked the Emergencies Act on Feb. 14 in response to cross-country protests and blockades demonstrating against COVID-19 restrictions. At the time, some border blockades had already been cleared, with the main body of protesters remaining in downtown Ottawa.

Thousands of police officers cleared trucks and protesters over the weekend of Feb. 18, while hundreds of financial accounts belonging to Freedom Convoy supporters were frozen without a court warrant under the act’s financial measures.

The public order emergency was revoked on Feb. 23, two days after the government submitted the issue to a vote of confidence in the House of Commons.

Use of the act requires by law that a commission and a special joint committee of parliamentarians be established to review the invocation.

The special joint committee started its work in late winter and has faced issues getting answers from the government, which has cited information being protected by cabinet confidence or solicitor-client privilege.

Using the act to declare a public order emergency was unprecedented in Canadian history, and the reviewing bodies will attempt to determine whether the threshold was meant for doing so.

The Emergencies Act replaced the War Measures Act in 1988, which had been invoked three times: during the two World Wars and the 1970 FLQ crisis in Quebec.

The creator of the act under the government of Brian Mulroney, Perrin Beatty, explained to the special joint committee on March 29 that the War Measures Act could not be challenged in court and did not protect civil liberties.

The Emergencies Act is supposed to include better protections in that regard and provide for more accountability.

“Even if you find that invoking the act was warranted, you should work to make it unnecessary if we face similar circumstances again,” he said.