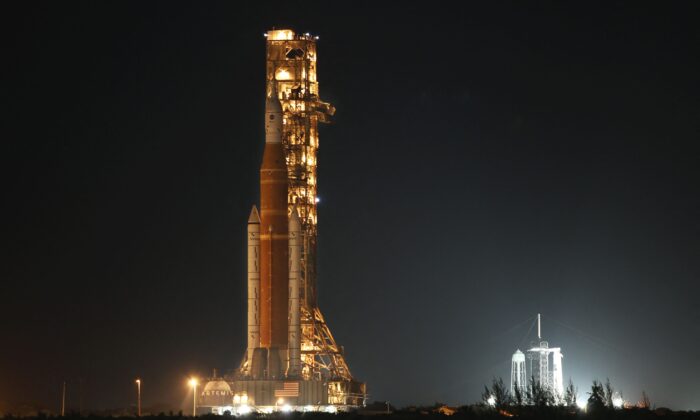 The massive Artemis I rocket atop its mobile launch platform back to the Vehicle Assembly Building at the Kennedy Space Center in Florida on April 26, 2022. (Gregg Newton/AFP via Getty Images)
Economy

Elon Musk’s Starship Launch to Cost Just $10 per Kg: How It Compares With ‘Heavy Lifters’ From 5 Decades Ago

The Tesla Inc. Elon Musk-owned SpaceX’s Starship is a launch vehicle the company is developing and testing for orbital launch and for transporting humans and cargo beyond Earth.

Science, a peer-reviewed academic journal, on Sunday shared on Twitter a graphic showing the height, payload capacity, and inflation-adjusted cost per kilogram of some launch vehicles dating back to 1967.

The caption read, “Starship will be the biggest rocket ever. Are space scientists ready to take advantage of it?”

Starship will be the biggest rocket ever. Are space scientists ready to take advantage of it?

Starship has a height of 120 meters compared to 111 meters for Saturn V—another super heavy-lift launch vehicle developed by NASA in 1967. The cost per kilogram of Starship for low-earth orbit is $10 compared to $65,400 for the 1981-debuted Space Shuttle Columbia, which was the most expensive among the five launch vehicles Science used for comparison.

Commenting on the tweet, Musk said, “Starship will be an incredible enabler for science. Full reusability & high production rate drive several orders of magnitude improvement in $/kg to orbit & beyond.”

The billionaire added that the next-gen Starlink constellation would be the primary user of this rocket. Therefore, he doesn’t see the need for science to cover the fixed cost.

Starship will be the biggest rocket ever. Are space scientists ready to take advantage of it?

One Twitter user shared a 2020 tweet by Musk that stated the marginal cost of launch will be less than $1 million for more than 100 tons to orbit and that the cost of launch will therefore mostly be determined by fixed expenses divided by the number of launches per year.

Is Starship still aiming for launch cost below $1.5M, out of which ~$500,000 would be fuel/propellant cost?

Musk also concurred with another tweet by one of his followers, that stated the Starship fleet was designed to achieve 1,000 times more payload to orbit than all other rockets on Earth combined.

Starship is the key to accomplishing Musk’s long-cherished dream of making the human species multi-planetary.

“We are trying to achieve the holy grail of rocketry, which is the fully reusable rocket,” Musk told TV host Jay Leno during a Starbase tour, according to snippets of a yet-to-be aired episode of ‘Jay Leno’s Garage’ shared by CNBC. He also noted that it can be re-flown rapidly like an aircraft. “And that is an essential invention that is necessary to make humanity a multi-planet species,” Musk said.

The official Twitter handle of ‘Jay Leno’s Garage’ shared a snippet of the episode where Musk is seen giving the television an exclusive tour of the SpaceX launch facility.

“Patents are for the weak” – @elonmusk
— Jay Leno’s Garage (@LenosGarage)