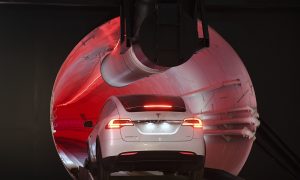 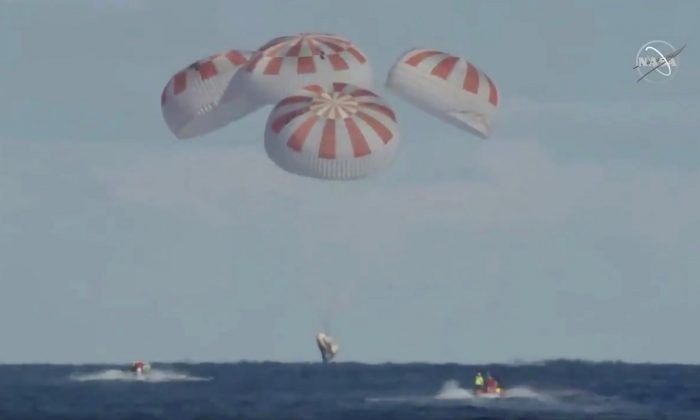 An unmanned capsule of the SpaceX Crew Dragon spacecraft splashes down into the Atlantic Ocean, after a short-term stay on the International Space Station, in this still image from video, in the Atlantic, about 200 miles off the Florida coast, on March 8, 2019. (Courtesy NASA/Handout via Reuters)
Space

After a six-day mission to the International Space Station, Crew Dragon detached at about 2:30 a.m EST and sped back to earth, reaching hypersonic speeds before an 8:45 a.m. EST splash-down about 200 miles off the Florida coast.

A SpaceX rocket launched the 16-foot-tall capsule from the Kennedy Space Center in Florida last Saturday.

Successful splashdown of the #CrewDragon right on time at 8:45 a.m. ET. pic.twitter.com/0qHhHzD4Js

“Everything happened just perfectly, right on time the way that we expected it to,” Benjamin Reed, SpaceX’s director of crew mission management, said in a live stream from California.

It was a crucial milestone in the U.S. National Aeronautics and Space Administration’s Commercial Crew Program ahead of SpaceX’s first crewed test flight slated to launch in July with U.S. astronauts Doug Hurley and Bob Behnken.

“This really is an American achievement that spans many generations of NASA administrators and over a decade of work,” said current Administrator Jim Bridenstine.

Steve Stich, the crew program’s deputy manager with NASA, said the vehicle was doing well after the splash-down.

The capsule, which was lifted out of the water by a boat using a crane, is due back on land by Sunday. The live stream showed its protective shell had been weathered from intense heat during re-entry.

The mission carried 400 pounds of test equipment to the space station, including a dummy named Ripley outfitted with sensors around its head, neck, and spine to monitor how a flight would feel for a human.

NASA has awarded SpaceX and Boeing Co a total of $6.8 billion to build competing-rocket and capsule systems to launch astronauts into orbit from American soil, something not possible since the U.S. Space Shuttle was retired from service in 2011.

Atmospheric entry at 17,000 mph is like a meteor & will vaporize steel. Burn marks below are on cold side. Main heatshield on bottom. https://t.co/GRs7j751R4

Results from this mission will determine whether SpaceX can stick to its current 2019 test schedule following previous development delays for the Hawthorne, California-based company and Boeing.

“I don’t think we saw really anything in the mission so far—we’ve got to do the data reviews—that would preclude us from having a crewed mission later this year,” Stich said.

The launch systems are aimed at ending United States reliance on Russian Soyuz rockets for $80 million-per-seat rides to the $100 billion orbital research laboratory, which flies about 250 miles above the earth.

Beautiful view of the @SpaceX #CrewDragon as it successfully undocked from the International Space Station pic.twitter.com/ycnkagpJbx

The short-notice solicitation, posted on Feb. 13, “provides flexibility and back-up capability” as the companies build their rocket-and-capsule launch systems.

Bridenstine told Reuters the cost per seat on the Boeing or SpaceX systems would be lower than for the shuttle or Soyuz.

Privately owned SpaceX, also known as Space Exploration Technologies Corp, was founded in 2002 by Musk, who is also a co-founder of electric car maker Tesla Inc.