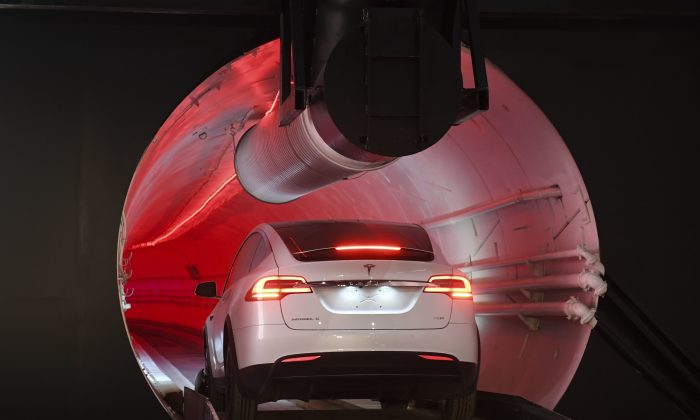 Elon Musk’s tunnel boring operation has moved its headquarters from the Los Angeles area to Texas and is pursuing several new tunnel projects in the Lone Star State.

The Boring Company, formerly in Hawthorne, Calif., is now based in Pflugerville, a suburb near Austin, Texas.

Hawthorne Chamber of Commerce President Patricia Donaldson said the move happened sometime in the past year.

The company announced on April 21 it had raised $675 million in new funding and is now valued at nearly $5.7 billion.

Musk founded The Boring Company in 2016 to “solve traffic.” The company has since completed its first transportation tunnel in Las Vegas and has many more in the planning stages.

“Traffic is driving me nuts. Am going to build a tunnel boring machine and just start digging,” Musk wrote on Twitter in 2016 before starting the company.

The company creates safe, fast-to-dig and low-cost transportation, utility, and freight tunnels, and has spent the last five years building technologies designed to mitigate traffic and beautify cities, according to its website.

A plan for the company to build a tunnel system within the city of Los Angeles appears to have stalled. The privately funded transit system was designed to allow travel from Westwood to LAX in just six minutes, said Musk at a TED Conference in 2017.

Another project, the Dugout Loop, was planned to connect L.A.’s Dodger Stadium to an undetermined terminal and has also not made progress. The system would have transported fans in a few minutes via a tunnel under Sunset Boulevard and Vin Scully Avenue.

The Los Angeles Dodgers organization was not available for comment about the status of the project, and the Boring Company has since removed the project information from its website.

The company also opened a 1.7-mile tunnel at the Las Vegas Convention Center in April 2021. The $5.2 million tunnel network is designed to shuttle about 4,400 passengers an hour.

Several additional tunneling projects may be in the works for the company in Texas. The Boring Company is communicating with officials about potential tunnels at the Austin-Bergstrom International Airport to connect the terminal to downtown Austin, according to local news reports.

Company officials have also met with City of Austin officials to discuss a possible underground transportation tunnel from the new Tesla Gigafactory in the city, according to KXAN.

Musk is also CEO of SpaceX, a reusable rocket company that remains based in Hawthorne, Calif., CEO of the electric vehicle company Tesla, and co-founder of Neuralink Corporation, a neurotechnology company developing brain implants to help people communicate and to assist with paralysis.

The Boring Company and SpaceX didn’t respond to a request for comment by press time.