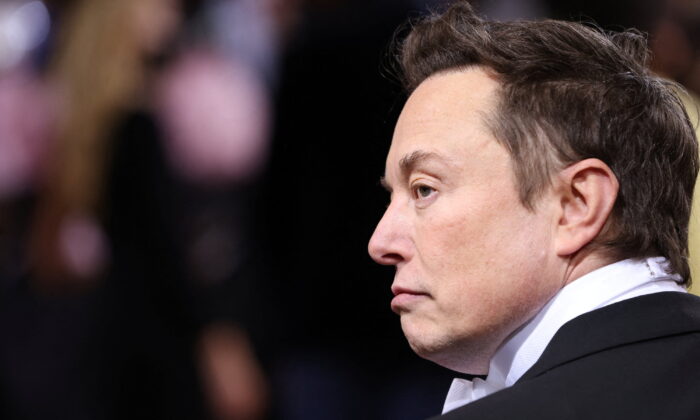 Elon Musk arrives at an event in New York City, on May 2, 2022. (Reuters/Andrew Kelly)
Inflation

Tech entrepreneur Elon Musk weighed in on the inflation debate as Federal Reserve policymakers prepared to convene for a two-day meeting at which markets expect the central bank to deliver another large rate hike to cool soaring prices.

Musk took to Twitter on Sept. 19 to argue that former Treasury Secretary Larry Summers had made a “fundamental error” in viewing the current bout of inflation as similar to the 1970s and deeply entrenched.

“Yes, the fundamental error is reasoning by analogy, rather than first principles,” Musk wrote in response to a message by Ark Invest CEO and CIO Cathie Wood, who argued that Summers “seems to be leading the Biden administration astray with his conviction that inflation is intractable, with the 1970s as his guide.”

Wood added in a follow-on message that the current bout of inflation started with the pandemic and supply-chain dislocations, and was made worse by Russia’s invasion of Ukraine.

“The Fed is solving supply-chain issues by crushing demand and, in my view, unleashing deflation, setting it up for a major pivot,” she argued, prompting Musk to respond with his concurrence.

Musk’s remarks feed into the current debate around whether the Fed is hiking too much or too little, and whether more inflation—or deflation—is in the pipeline as the economy cools.

Summers told Bloomberg’s “Wall Street Week” in a recent interview that the Fed acted too slowly on soaring inflation and that the central bank now needs to keep hiking aggressively to tamp down price pressures.

“History records many, many instances when policy adjustments to inflation were excessively delayed and there were very substantial costs,” Summers said, noting that the most significant example of such costs was during the long period of high inflation during the 1970s.

Summers added that he saw evidence that inflation had become entrenched. He pointed to core inflation rising more than 6 percent in August, as well as sharp wage boosts for job-switchers and rising input costs in the housing sector.

The former Treasury Secretary also said he wouldn’t be surprised if the Fed hiked rates to above 5 percent to get inflation down.

The inflation discussion comes as the Fed’s policy-making arm, the Federal Open Market Committee, starts its two-day meeting on Sept. 20–21. A decision on interest rates will be announced Wednesday.

‘Some Pain’ Price of Bringing Down Inflation

The Fed likely will raise its benchmark interest rate by 75 basis points on Sept. 21 for a third consecutive meeting, according to fed funds futures contracts, which give 80 percent odds for such a hike and a 20 percent chance for a bigger 100 basis-point boost.

“We are seeing clear signs that central banks are not about to ‘blink’ and are prepared to tolerate recession, if that is the price they need to pay to bring inflation under control, and this means higher short-end yields, globally,” Andrew Ticehurst, a rates strategist at Nomura, told Bloomberg.

Futures markets now see the benchmark federal funds rate as high as 4.30 percent by the end of this year, peaking around 2 percentage points above current levels at 4.43 percent in March and not falling back below 4 percent until 2024.

With many analysts viewing the Fed as being late to the inflation fight, Fed Chair Jerome Powell has made remarks recently underscoring the central bank’s determination to crush price pressures, even at the cost of higher unemployment and “some pain” for American households.

“Reducing inflation is likely to require a sustained period of below-trend growth. Moreover, there will very likely be some softening of labor market conditions,” Powell said in a speech on Aug. 26.

“These are the unfortunate costs of reducing inflation. But a failure to restore price stability would mean far greater pain,” the central bank chief added.