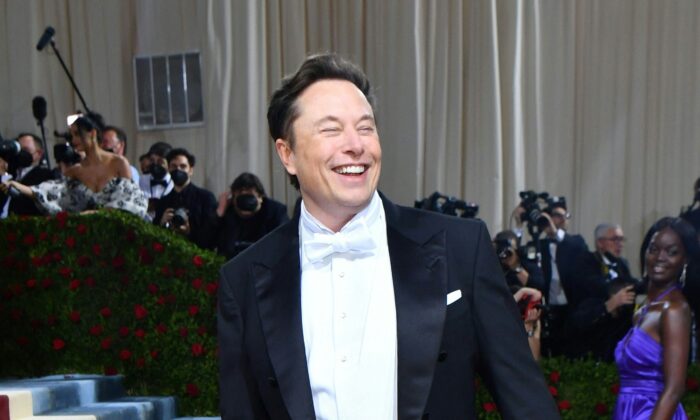 Billionaire entrepreneur Elon Musk arrives for the 2022 Met Gala at the Metropolitan Museum of Art in New York on May 2, 2022. (Angela Weiss/AFP via Getty Images)
Companies

Greenwashing refers to processes by which companies falsely present themselves as more pro-environment than they really are.

“The allegations are that DWS has been advertising so-called ESG financial products for sale as being particularly green and sustainable when they actually weren’t,” a spokesman for the public prosecutor told Fortune.

In a June 1 tweet responding to the news, Elon Musk wrote, “I have yet to see an ESG list that *isn’t* fraudulent.”

Musk had earlier called ESG a “scam” following the removal of electric car company Tesla Inc. from the ESG Index, while Exxon Mobil Corp. remained on the list.

“Exxon is rated top ten best in world for environment, social & governance (ESG) by S&P 500, while Tesla didn’t make the list! ESG is a scam. It has been weaponized by phony social justice warriors,” Musk wrote.

In the course of the investigation, which has been ongoing since January, prosecutors claim to have found evidence that could support allegations of prospectus fraud. A whistleblower alerted authorities to the alleged fraud.

Measures taken by the prosecutors are targeted against “unknown persons” in connection with greenwashing allegations against DWS, Deutsche Bank revealed. A spokesperson for DWS stated that the firm was “continuously and comprehensively” cooperating with authorities.

“DWS said that they have continuously cooperated fully with all relevant regulators and authorities on this matter and will continue to do so,” Deutsche Bank said.

Asoka Woehrmann, chief executive of DWS, resigned June 1 amid the ongoing investigation. He cited “personal attacks and threats” as a reason for his resignation.

In a January 2021 interview with Der Spiegel, former DWS executive Desiree Fixler warned that the company was making misleading claims about ESG products.

DWS markets its ESG strategy as “world-class and above the industry standard” but claims internally that it is “poor and unclear,” Fixler said.

“It is not a crime to lag behind a market or to have weaknesses here and there. But the point where DWS crossed the line was when the company marketed itself as a ‘leader’ and ‘above the industry standard’ and when it publicly stated that the majority of its assets under management were ESG integrated,” Fixler said.

“DWS has defined and qualified its ESG framework in a policy statement and in its annual report. They pretend one thing to the outside world, but say something different internally,” Fixler said.