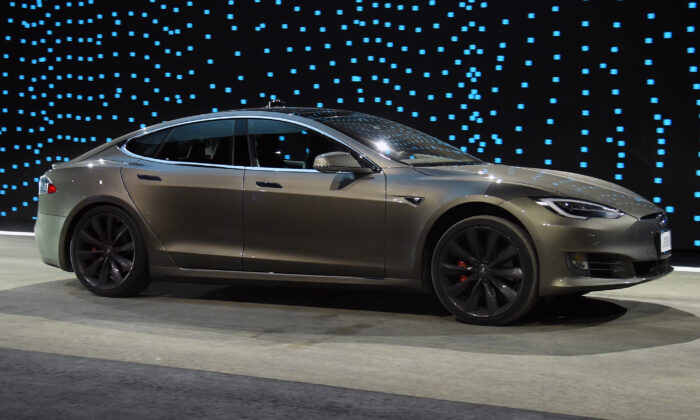 A Tesla Model S P100D in Ludicrous Mode is shown, during a press event for CES 2017 at The Pavilions at Las Vegas Market in Las Vegas, on Jan. 3, 2017. (Ethan Miller/Getty Images)
Markets

The 20 percent jump in FSD package pricing was introduced a day later than scheduled and includes no change in the price of the software’s monthly subscription service.

Musk had earlier this month said the FSD price increase would come into effect on Jan. 17. He said the monthly subscription price for FSD would rise close to the software’s wider release.

The monthly subscription for the FSD is currently priced at $199.

The world’s richest person on Tuesday replied to a post on the microblogging site Twitter that suggested the FSD subscription model pricing is a “much easier pill to swallow.”

Musk defended the price hike and said people do not yet understand how valuable an autonomous vehicle will be.

The post by the Twitter handle “Tesla_Raj” also shared a screenshot of the latest price along with the features that it offers including navigation on autopilot, auto lane change, autopark, summon, FSD-computer, traffic light and stop sign control. The list also lists “auto steer on city streets” as a soon-to-be-added feature.

The monthly subscription package allows a customer to pay for what they plan to use while a full package allows them to use future capabilities or features that get added later.

Tesla vehicles are equipped with a standard driver assistance system branded as Autopilot. For an additional $12,000, owners can buy the FSD—though the system still requires the driver’s attention at all times and is still not fully autonomous.

There are five levels of automation under standards created by SAE International. A Level 4 system implies the vehicle can handle all aspects of driving without human intervention. Tesla is currently at Level 2.

Tesla first started testing out the FSD in beta in late 2020 among a select group of customers known as beta testers. The FSD software was priced at $8,000 at the time.