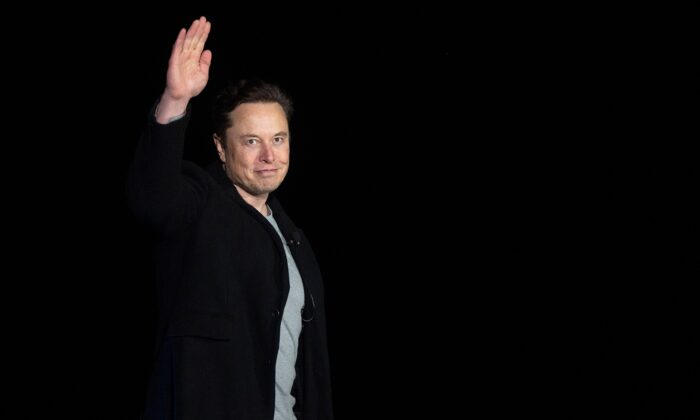 Elon Musk gestures as he speaks during a press conference at SpaceX's Starbase facility near Boca Chica Village in South Texas on Feb. 10, 2022. (Jim Watson/AFP via Getty Images)
Social Media

Tesla CEO Elon Musk has hinted at a backup plan if his bid to take over Twitter fails.

Speaking at a TED event in Vancouver on Thursday, the billionaire entrepreneur said: “I am not sure that I will actually be able to acquire it.”

While Musk has said his $54.20-per-share offer is his “best and final” one, he noted that he has a Plan B if his offer is rejected by the company’s board of directors, however, he declined to provide further details regarding that plan.

Musk, who is Twitter’s largest shareholder, has made an offer to buy “100 percent” of the company for around $43 billion, according to a regulatory filing, in which he said that the social media platform needs to be “transformed as a private company.”

“My offer is my best and final offer and if it is not accepted, I would need to reconsider my position as a shareholder,” Musk said in the filing.

His offer, which is 18 percent higher than the last closing price, is under consideration, the company’s board said on Thursday.

However, the move puts the company’s board in an uncomfortable position, and should they choose to accept the offer, it would effectively give Musk control of how Twitter is run.

Businessman Musk has previously questioned Twitter’s commitment to free speech, telling his followers that “free speech is essential to a functioning democracy.”

The social media platform has repeatedly been accused of censoring some minority and politically conservative viewpoints, claims that it denies.

However, in one such case, former President Donald Trump had his account permanently removed from the social networking site in January 2021, with the tech giant citing his alleged violation of the company’s “Glorification of Violence” policy.

Since Musk acquired a 9.2 percent passive stake in the company, conservatives have been calling on the businessman to restore Trump’s account.

During his appearance at Thursday’s TED event, the South African native said that Twitter is the “de facto town square,” and stressed the importance of there being an “inclusive arena for free speech.”

“One of the things that I believe Twitter should do is open source the algorithm and make any changes to people’s tweets, or if they emphasized or de-emphasized, that action should be made apparent so anyone can see that an action has been taken so there’s no sort of behind-the-scenes manipulation, either algorithmically or manually,” he explained.

Musk said that under his watch, Twitter would be “cautious” when it comes to issuing users with permanent bans and would prefer to adopt “time outs” for such users instead as they function much “better.”

However, he admitted that not everything would be “perfect.”

“A good sign as to whether there is free speech: is someone you don’t like allowed to say something you don’t like? If that is the case, then we have free speech,” he added. “That is a sign of a healthy, functioning free speech situation.”

Musk also said that he has “sufficient assets” to follow through on his bid for Twitter should it be approved.

The Twitter Board of Directors on Thursday said it will “carefully review” Musk’s proposal to “determine the course of action that it believes is in the best interest of the Company and all Twitter stockholders.”

Ali Mogharabi, a senior equity analyst at Morningstar, wrote in a note: “We believe the probability of Twitter accepting it is likely below 50 percent” but warned that “the board may also be pondering whether it should discuss leadership changes, such as replacing CEO Parag Agrawal, with Musk as that may lessen the likelihood of Musk selling his shares if the bid is rejected.”