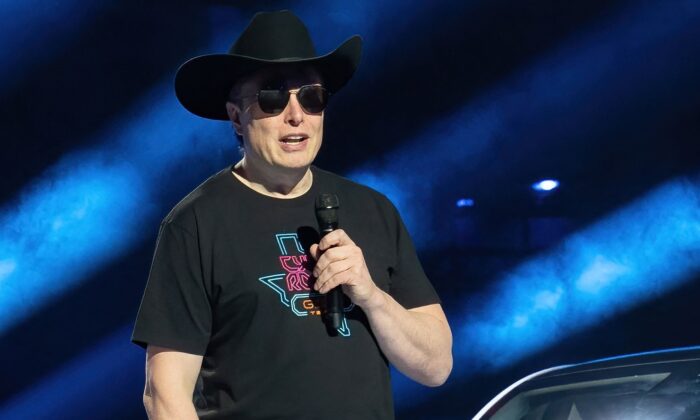 Billionaire tech mogul Elon Musk shared a meme on social media evoking determination to win his battle against Twitter in court even if the odds are stacked against him as the social media giant looks to sue to force him to go through with a $44 billion buyout bid.

“Chuckmate,” Musk wrote in a post on Twitter that features an image of iconic action movie star Chuck Norris sitting behind a chess board, smiling even though his opponent has a crushing advantage in the number of chess pieces.

Musk’s single-word caption is a play on the word “checkmate,” a winning move in chess. By featuring Chuck Norris, who’s the subject of numerous internet memes that evoke the idea of winning against all odds, Musk seems to be expressing confidence that whatever legal battle with Twitter awaits, he’ll emerge victorious.

‘Confident We Will Prevail’

Musk’s message, posted on July 11, came as media headlines were thick with speculation about how Twitter’s much-anticipated lawsuit against Musk might play out.

Initially, Musk agreed to buy Twitter for $54.20 per share, which is well above the current intraday market price of $33.65 and puts the total value of the buyout at around $44 billion.

But the Tesla chief has since moved to abandon the deal, making a formal filing with the U.S. Securities and Exchange Commission (pdf) that claims Twitter has repeatedly refused to provide information regarding how many bots and automated accounts are on the platform and the company’s “financial condition.

Twitter has reacted to the filing by accusing Musk of “knowingly” breaching their contract for the purchase of the platform.

Bret Taylor, chairman of Twitter, said in a July 8 social media post that the company plans to sue Musk in the Delaware Court of Chancery to force him to follow through with the deal. There has been media speculation that a filing could come as soon as early this week.

While Musk has nominally agreed to a $1 billion breakup fee if he backs out of the deal, Twitter seems determined to try and force the deal to go through.

“We are confident we will prevail,” Taylor said in his post.

But some analysts aren’t so sure that Twitter will end up getting its way in the dispute.

“What are they going to do if there is a judgment and he says, ‘Well, I’m still not going to buy it’?” Zohar Goshen, professor of transactional law at Columbia Law School, told The Wall Street Journal. “They don’t really have tools to force him to go through with it. You don’t put people in jail because they don’t buy something.”

Wedbush analyst Dan Ives wrote in a note on Monday that the situation will be a challenging one for Twitter to emerge from and be able to claim victory.

“For Twitter this fiasco is a nightmare scenario and will result in an Everest-like uphill climb for [Twitter CEO] Parag [Agrawal] & Co. to navigate the myriad of challenges ahead around employee turnover/morale, advertising headwinds, investor credibility around the fake account/bot issues, and host of other issues abound,” Ives said in the note, which slashed Twitter’s price target to $30 from $43.

Ives later took to Twitter to say that, whatever the outcome of the lawsuit, both sides will be left bruised from the battle.

“Our view is there is no winner in the Twitter and Musk saga. It’s been a fiasco for Twitter, a black eye for Musk, and an overhang for Tesla’s stock since April. A very frustrating situation for all stakeholders in a deal that was a head scratcher from the beginning in April,” he said.

Other experts said there’s sure to be one group of winners from the spat—lawyers.

“The only sure winners in this situation are the lawyers,” Joseph Grundfest, a law professor at Stanford and former commissioner at the Securities and Exchange Commission, told NPR. “Because a lot of money is going to be spent litigating this question.”