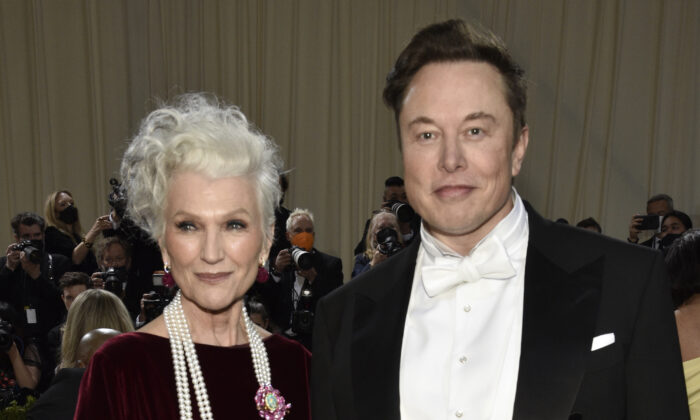 Maye Musk (L) and Elon Musk attend The Metropolitan Museum of Art's Costume Institute benefit gala celebrating the opening of the "In America: An Anthology of Fashion" exhibition in New York on May 2, 2022. (Evan Agostini/Invision/AP)
Media & Big Tech

Tesla CEO Elon Musk is contesting the veracity of a recent “exclusive” report alleging that he had an affair with the wife of Google co-founder Sergey Brin, calling it “total bs” and denying that claims that he and Brin are no longer friends.

Musk took to Twitter on Sunday evening to dispute the report by the Wall Street Journal, which alleged that the businessman had engaged in a brief affair with Brin’s wife, Nicole Shanahan, late last year.

He also called out the publication for running a story that lacked “solid factual basis.”

The report, which cited people familiar with the matter, alleged that the affair had prompted the Google co-founder to file for divorce in January this year after four years of marriage.

In the report, the Wall Street Journal also alleged that the situation had put an end to the long-term friendship between the two technology billionaires.

“This is total bs,” Musk said of the report, which he re-tweeted late on Sunday. “Sergey and I are friends and were at a party together last night!”

“I’ve only seen Nicole twice in three years, both times with many other people around. Nothing romantic,” Musk added.

According to the WSJ, which cited records filed in Santa Clara County Superior Court, Brin filed for divorce from Shanahan earlier this year, citing “irreconcilable differences.”

The divorce filing was made several weeks after Brin allegedly learned of the alleged brief affair, which took place in early December 2021, at the Art Basel event in Miami, according to the news outlet. Brin did not provide the WSJ with comment to confirm the allegations about him and his wife.

The WSJ report noted within the article that, at the time, Brin and his wife, who is an attorney and a research fellow at CodeX, the Stanford Center for Legal Informatics, were separated but still living together, citing a person close to Shanahan.

Based on ‘Random Hearsay’

“At a party earlier this year, Mr. Musk dropped to one knee in front of Mr. Brin and apologized profusely for the transgression, begging for forgiveness, according to people with knowledge of the incident,” the WSJ reported.

“Mr. Brin acknowledged the apology, but still isn’t speaking regularly to Mr. Musk, those people said,” the report states.
In a separate post on Twitter on Sunday, Musk joked: “Haven’t even had sex in ages (sigh).”

Musk, the richest person in the world, then called out the publication, saying the story about his alleged affair had been based on “third-party random hearsay.”

“WSJ is supposed to have a high standard for journalism and, right now, they are way sub tabloid,” he wrote. “WSJ should be running stories that actually matter to their readers and have [a] solid factual basis, not third-party random hearsay.”

In another post, the businessman stated that WSJ has run so many “hit pieces” on him and his electric vehicle company that he has “lost count.”

“It’s embarrassing for them, frankly. They once wrote an article saying [the] FBI was about to arrest me, so I called [the] FBI to ask what’s up and they said [the] WSJ article was total bs. Just more shortseller fud.”

The businessman backed out of his $44 billion acquisition of the social media platform earlier this month claiming that Twitter has failed to provide the necessary information needed to establish how many automated bots and fake accounts are on the platform.

Twitter is suing to force him to complete the deal.

Brin is the ninth richest person in the world, according to Forbes’ real-time billionaire’s list.

According to the WSJ, he and Shanahan, who share a 3-year-old daughter, are now involved in divorce mediation and his estranged wife is seeking more than $1 billion.

The Epoch Times has contacted Google and CodeX spokespersons for comment.