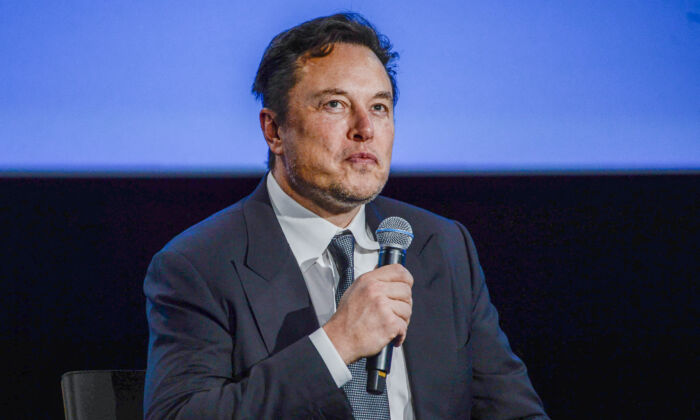 Tesla CEO Elon Musk looks up as he addresses guests at the Offshore Northern Seas 2022 meeting in Stavanger, Norway, on Aug. 29, 2022. (By Carina Johansen/NTB/AFP via Getty Images)
Markets

Billionaires Elon Musk and Jeff Bezos saw their fortunes plunge on Tuesday after a higher-than-anticipated inflation report was released, which led market experts to brace for another aggressive interest rate hike from the Federal Reserve.

Amazon founder Bezos’s wealth plunged by $9.8 billion, according to the Bloomberg Billionaires Index, while Tesla founder Musk saw his net worth decline by $8.4 billion.

The billionaire businessmen were not the only ones to suffer huge losses to their fortune; Facebook founder Mark Zuckerberg, former CEO of Alphabet Larry Page, and co-founder of Alphabet, Sergey Brin, also dropped their fortunes by more than $4 billion.

Warren Buffett and Bill Gates also lost $3.4 billion and $2.8 billion, respectively, according to the Billionaires Index.

The losses came after a broad selloff in the U.S. stock market following higher-than-expected Consumer Price Index data for August, with data from the Bureau of Labor Statistics (BLS) showing the U.S. annual inflation rate stood at 8.3 percent.

While that figure was down from July’s reading of 8,5 percent, markets had forecast a rate of 8.1 percent. Meanwhile, the core inflation rate, which excludes the volatile food and energy sectors, topped forecasts of 6.1 percent, coming in at 6.3 percent. That’s up from 5.9 percent in July.

The impact was felt immediately among U.S. stocks, with the Dow Jones Industrial Average and the S&P 500 Index down 2.7 percent and 3 percent, respectively, during midday trading on Sept. 13, while the NASDAQ tumbled 3.85 percent. Further losses were seen throughout the day; however, all three rose slightly overnight.

Experts now anticipate that the Federal Reserve will increase rates by another 75 basis points at the next meeting scheduled for Sept. 20–21, with further increases expected into early next year.

The Federal Reserve has so far raised borrowing in 2022 at a faster rate than at any time since the 1980s to fight inflation as it soared to a 40-year high.

In August, Fed Chair Jerome Powell warned that American households and businesses need to brace for “some pain” as the cost of living continues to rise.

“Reducing inflation is likely to require a sustained period of below-trend growth,” Powell said. “While higher interest rates, slower growth, and softer labor market conditions will bring down inflation, they will also bring some pain to households and businesses. These are the unfortunate costs of reducing inflation. But a failure to restore price stability would mean far greater pain.”

Despite taking a $1.2 trillion hit to their wealth since the start of the year, according to Bloomberg, such a loss represents a minuscule amount for the world’s 500 richest people, including billionaires Musk and Bezos, who still have the largest fortune on the planet.