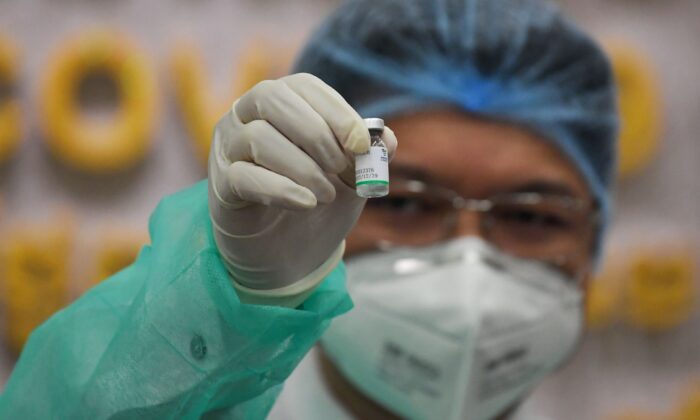 A medical staff shows the Sinopharm vaccine from China during the first day vaccination against the COVID-19 at Calmette hospital in Phnom Penh, Cambodia on Feb. 10, 2021. (TANG CHHIN SOTHY/AFP via Getty Images)
News

Senator Elizabeth Warren – in trying to make a dig at Senator Rand Paul for his remarks about vaccines causing “profound mental disorders” – ended up making a top Centers for Disease Control and Prevention (CDC) official lie to Congress. Dr. Anne Schuchat, director of CDC’s National Center for Immunization and Respiratory Diseases, lied about vaccine dangers when cross-examined by Senator Warren. The false testimony was made in a hearing held on February 10th, 2015 by the Senate Health, Education, Labor and Pensions (HELP) Committee, which has a history whitewashing CDC’s research misconduct.

Senator Warren asked Schuchat, “Is there any scientific evidence that vaccines cause autism?”

Asked the same question again, only about whether there is any evidence vaccines cause “profound mental disorders,” Schuchat said,  “No, but some of the diseases we vaccinate against can.” She also denied preservatives like thimerosal are toxic at the levels found in vaccines or that the timing of vaccination incurs any increased risk of side-effects.

Schuchat also stated, “Vaccines do not cause autism.”

Schuchat’s dishonest remarks are contradicted by what was first acknowledged within her own branch at CDC at least 15 years ago, that vaccines indeed cause autism according to its own research findings. CDC researchers even prepared a formal scientific abstract of similar results from an earlier analysis that they intended to present at CDC’s Epidemic Intelligence Service Conference in 2000. Yet CDC denied these findings in a public presentation before the Institute of Medicine (IOM), which was commissioned by CDC to produce a report in 2004 denying any association between the exposure and the outcome in question.

Today, Anne Schuchat’s position is even less tenable now that whistleblower and senior CDC scientist Dr. William Thompson plans to testify before Congress’ House Science Committee about fudging a report to absolve the measles, mumps, rubella vaccination of a role in causing autism. The lead author of that report is Dr. Frank Destefano who currently directs CDC’s Immunization Safety Office. In a recently recorded interview with journalist Sharyl Attkisson, he even admitted there was a “possibility” that vaccines can cause autism.

Why Schuchat would feel so emboldened as to give such blatantly dishonest testimony before the Senate is perhaps best explained by a congressional report released in 2007. The report sought to absolve CDC of wrongdoing in relation to its vaccine safety research concerning autism despite the proof to the contrary, and that report was produced by none other than the Senate HELP Committee.

No wonder the committee was so welcoming of Schuchat’s dishonesty; HELP has been a longtime facilitator of the lies her agency parrots.

Correction: Dr. Schuchat’s testimony was not given under oath and was therefore not perjury as this article previously stated.