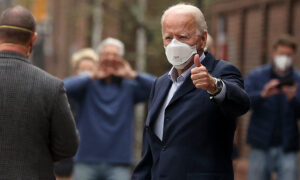 If There Is a President Biden, Don’t Expect to See Him Around for Long
0
Share Now
FacebookTweetParlerEmail
Copy Link 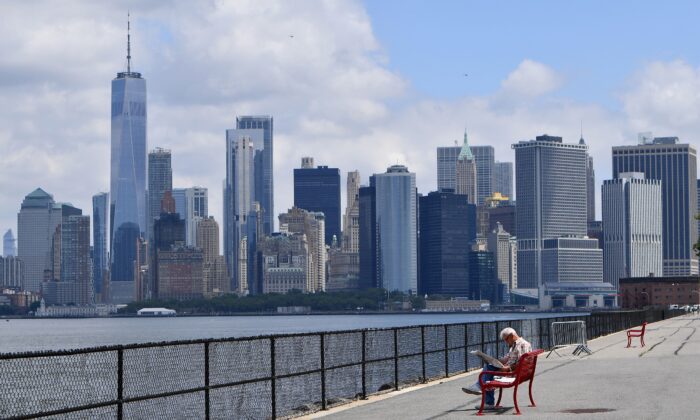 The Manhattan skyline is visible in the distance as a man visits Governors Island in New York City on July 15, 2020. (Angela Weiss/AFP via Getty Images)
Viewpoints

Do you live in New York City?

If not, congratulations. You may have been spared preposterous virtue-signaling Petri dishes like The Dalton School, an “elite” school on Manhattan’s Upper East Side, where for a mere $54,000 per annum, young Stephanie or Dylan can spend their days on Zoom because the school, unlike almost every other New York private school, refuses to open because of lazy teachers claiming to be terrified of our latest Chinese import, the CCP virus.

“Go Forth Unafraid” is Dalton’s official motto, but that’s obviously a misnomer.

The school is terrified of life and exists solely to cater to the wounded “amour propre” of its self-absorbed faculty and the roughly 1,300 K–12 students whose parents desperately hope that Dalton will be their child’s magic ticket to the advanced indoctrination and higher fatuousness of the Ivy League.

It’s a pathetic ambition, more so every year as the moral bankruptcy of America’s higher educational establishment declares itself in ever more putrid profusion, like the gangrenous suppurations of the Emperor Galerius on his death bed.

Even the things you think might be candid in Dalton’s PR turn out to be lies.

Consider, for example, its much-ballyhooed “Commitment to Anti-Racism.” (Surgeon General’s Warning: have some Dramamine or an air-sickness bag handy.)

This desideratum is plastered all over Dalton’s web site.

But a closer look shows that it is really just code for the more insidious racism of the woke and malignant charlatans who view every aspect of life through the distorting prism of race. They believe they declare their election by broadcasting their obsession with race.

In fact, they merely underscore their rejection of Martin Luther King Jr.’s vision of a world in which people are judged by the “content of their character” not the color of their skin.

Dalton has always been a faintly preposterous left-wing redoubt for the self-absorbed and overprivileged.

But it has lately, under pressure from the very public exhibitions of Black Lives Matter, Antifa, and other anti-American racialist thugs, turned the corner from progressive fatuousness to preposterous insanity.

The whole sorry story of Dalton’s terminal decline was laid out by the novelist Scott Johnston in a couple of blog posts last week. (By the way, I recommend Johnston’s novel “Campusland”: it’s both funny and true.)

Johnston reports on an eight-page faculty memo, signed by all or nearly all of the faculty and added to by some black students, listing a series of demands that are, as Johnston notes, “breathtaking in their wokeness.”

The demands begin with the assertion—de rigueur in any academic communication today, much like PBUH after any mention of Mohammed by devout Muslims—that Dalton is guilty of “systemic racism.”

Then come the demands. Here is a précis compiled by Johnston:

“Here is just a sample of the demands:

Some of these proposals are illegal, since they require treating students differently solely on the basis of race; nearly all are explicitly racist, for the same reason; and some would be financially ruinous if implemented.

Just for fun, I’d like to be in on the meeting when a Dalton development officer explains to his well-heeled mark, er, I mean his well-heeled prospect that the $5 million he is asking for will be split with New York City Public Schools.

That would be a fun meeting, unless, of course, you weren’t counting on getting the money.

The sad irony is (though not so sad as to escape the delectation of schadenfreude) that the pursuit of such “progressive” insanity will doom Dalton.

The Revolution always turns on its own. As Johnston puts it, “When progressive institutions embrace revolutionary ideologies, as Dalton has done, they fail to appreciate that the revolution comes for them first. The scaffolding is being built on East 89th Street.”

There is also the pushback. Parents are yanking their children out of the cesspit that is Dalton, donors are closing their checkbooks, and I would be willing to wager that serious colleges will look askance at Dalton’s experiment with academic hari-kari.

There’s also the court of public opinion. Doubtless, the Eloi-like denizens of Dalton expected to be lauded for their “brave” proclamations of “anti-racism.”

Most of the comments on Johnston’s columns show that these juvenile antics are being met with some portion of the contempt that they deserve. Typical is this bulletin from “Anonymous”:

“Your demands are stupid and you people are stupid. Critical Race Theory is a stupid religion and a scam but I actually hope the school meets all of these ridiculous demands just to watch it implode just like Evergreen hahahahaha. CRT is a gift that destroys everything it touches. Enjoy being racist fanatics while you can because the world is waking up to your [expletive] gift. You people are the real racists.”

I can’t improve on that.