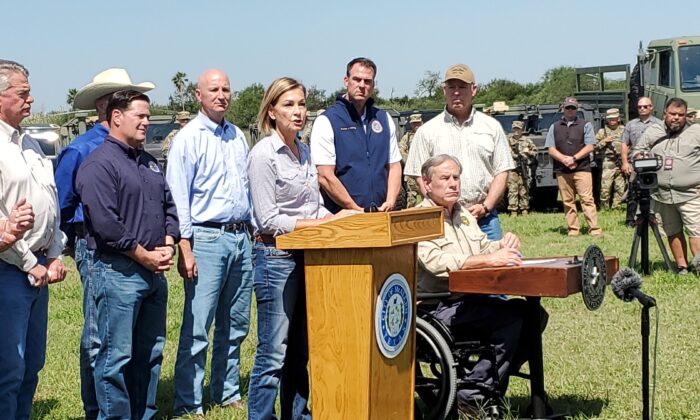 Iowa Gov. Kim Reynolds speaks at a press conference on the border situation while other governors look on, in Mission, Texas, on Oct. 6, 2021. (Marina Fatina/NTD)
Federal-State Relations

10 Governors Call on Biden to Take Action on Border Crisis

Texas Gov. Greg Abbott, a Republican, was joined by nine peers on Oct. 6 at the U.S.–Mexico border, with the group calling on President Joe Biden to take 10 steps to address the worsening border crisis.

“We need Joe Biden to step up and lead. We can do this by enacting commonsense policies,” Iowa Gov. Kim Reynolds, a Republican, told reporters at the briefing in Mission, Texas.

Arizona Gov. Doug Ducey, another Republican, added: “Either he’s unwilling to solve this crisis, or he doesn’t know how. So we’re here to offer solutions.”

The group wants the Biden administration to fully reimplement the “remain in Mexico” program, which cut down on illegal immigration; resume construction of the border wall; stop the release of illegal immigrants into the U.S. interior; dedicate additional judges and other resources to clear the growing backlog of asylum cases; and deploy more federal officers to the border.

The governors are also urging Biden and other top officials to “state clearly and unequivocally that our country’s borders are not open,” continue using Title 42 pandemic powers to expel illegal immigrants, reenter agreements with Northern Triangle countries and Mexico, resume deporting all criminals, and dedicate federal resources to address human and drug trafficking.

They’ve pressed Biden to meet with them in person, but he has so far refused.

Top Biden administration officials have defended the administration’s approach to immigration enforcement, arguing that the Trump era system was cruel and inhumane and that it takes time to reform it.

Supporters say the revamped system treats immigrants better and better represents U.S. values. But critics note that the skyrocketing number of illegal border crossings has been accompanied by drug trafficking, human trafficking, and transmissible diseases, including COVID-19. They also note that some of the Biden administration’s actions violate federal law and court orders, including the administration’s announcement that it will ultimately end “remain in Mexico” in defiance of the Supreme Court.

“I want to make clear that while Biden continues to dither, Texas and other states are taking action to do the federal government’s job,” Abbott said.

Texas is cracking down on border enforcement, allocating $3 billion to the problem while deploying thousands of National Guard personnel and Texas Department of Public Safety officers. The state is also emphasizing the arrest of illegal immigrants, jailing them on trespassing charges.

White House officials didn’t respond by press time to a request for comment on the governors’ remarks and demands.

White House deputy press secretary Karine Jean-Pierre told reporters on Oct. 5 that the federal government is working with Texas authorities to prepare for a surge of tens of thousands of Haitians who are heading to the U.S.–Mexico border.

“We continue to have the push factors in telling folks, ‘This is not the time to come,’ and we’re going to continue to do what we’ve been doing in the past,” she said.

Correction: This article has been updated to correct the number of governors who joined the press conference.