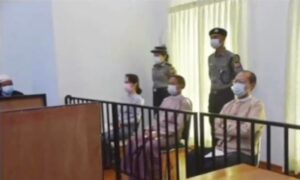 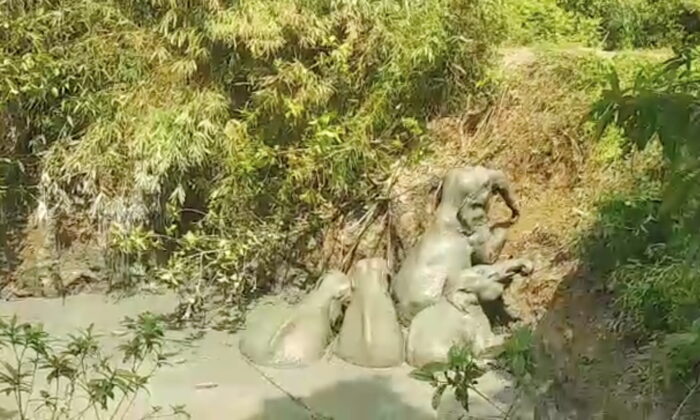 An elephant herd is seen stranded in a mud pit, in Aung Zeha village, Rakhine state, Burma, on June 4, 2021, in this picture obtained from social media. (Zaw Phyo Than and Kyaw Kyaw Oo/via Reuters)
Asia & Pacific

Four wild elephants made their way out of the mud pit in Burma (also known as Myanmar) where they had been trapped on Friday, urged on by the villagers who dug them an escape route.

The villagers in the western Rakhine State usually avoid elephants when they come across them in the forest, but feared the animals would have died if they had stayed trapped in the hole.

Video verified by Reuters showed the four animals struggling one by one to gain a foothold on the slope where the villagers spent some five hours digging rough steps for them.

Eventually, they all make it out—the last one appearing to turn briefly towards where villagers are cheering before heading off with its companions.

“We rescued them because we know that elephants are at risk of vanishing worldwide and they are part of our state’s heritage,” Zaw Phyo Than, 40, told Reuters by phone.

“The four animals were so cute and that’s why everyone from around our village came to save their lives.”

It was unclear how they fell into the pit.

Surveys have estimated that only a few hundred elephants remain in Rakhine State, down from thousands just decades ago.