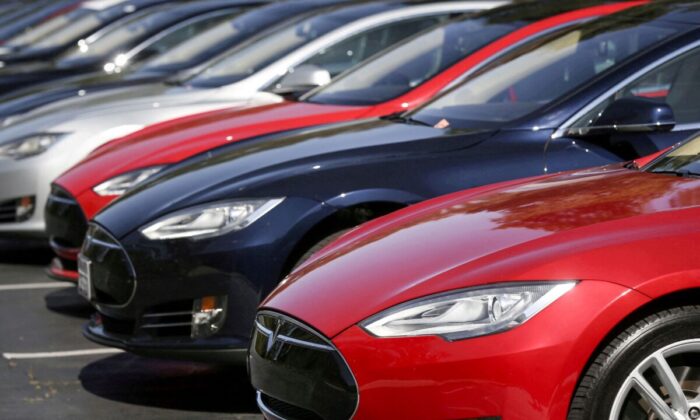 A row of Tesla Model S sedans are seen outside the company’s headquarters in Palo Alto, Calif., on April 30, 2015. (Elijah Nouvelage/Reuters)
By Katabella Roberts

Electric vehicles, including those from Tesla, are among some of the least reliable sold in the United States, according to the Consumer Reports 2022 Annual Auto Reliability survey released Tuesday.

Each year, the organization surveys members to find out if they encountered any problems with their vehicles in the past 12 months in 17 areas, including the engine, transmission, in-car electronics, and others.

Consumer Reports then uses that information to predict the reliability ratings for new cars from every major automaker for every model sold in the United States.

In this year’s survey, data was collected from owners of over 300,000 vehicles from the 2000 to 2022 model years as well as early 2023 models. Predictions for 2023 models are “based on each year’s overall reliability for the past three years, provided that the model hasn’t been redesigned during that time,” according to Consumer Reports.

In order to predict reliability for new models, those redesigned for 2023, and models with insufficient data, Consumer Reports, “analyzes the brand’s reliability history, the previous generations, and, if applicable, the reliability of models with shared components.”

A total of 24 auto brands were covered in the 2022 survey, which found that hybrid vehicles and mid-sized or large and gas-powered sedans are among the most reliable vehicles sold.

Electric Vehicles Continue to Be Problematic

Meanwhile, electric vehicles and full-size pickup trucks are among the most problematic.

Among the top 10 most reliable automakers in the survey, seven are headquartered in Asia, according to Consumer Reports. Toyota, Lexus, BMW, Mazda, and Honda were in the top five. Subaru ranked seventh and Acura ranked eighth overall, and Kia ranked ninth.

The highest-ranked domestic brands were Lincoln and Buick, which ranked 10 and 11 respectively, while Volkswagen, Jeep, and Mercedes-Benz ranked the lowest.

Elsewhere, the survey found that owners of electric vehicles reported issues with charging systems, batteries, and electric motors. Of the 11 EV models that Consumer Reports has data on, only four of them have average or better than average predicted reliability, according to the survey. They were the Kia EV6, Tesla Model 3, Nissan Leaf, and the Hyundai Ioniq 5.

The study noted that although the Elon Musk-owned company continues to be the “market leader in EV sales and the manufacturer on which CR received the most data from owners,” some vehicles from the automaker also continue to be plagued with issues with the body hardware, steering and suspension, paint and trim, and the climate system.

On the other hand, hybrid-electric vehicles, although not so popular, are much more reliable according to the survey, as are mid-size and full-size sedans.

However, the study noted that “while hybrids tend to be reliable, plug-ins are less so.”

“Both the Toyota Prius Prime and RAV4 Prime have lower reliability scores than their hybrid counterparts, and, in the case of the RAV4, conventional siblings,” the study states. “And the plug-in Chrysler Pacifica hybrid is one of the least reliable vehicles in the survey.”

“With today’s inflated car prices, people are keeping their vehicles longer than ever. A hybrid can provide years of trouble-free miles, and they are a good defense against rising fuel prices,” said Jake Fisher, Consumer Reports’s senior director of automotive testing, in a statement. “With a top-rated hybrid, you get solid reliability, better fuel economy, and lower maintenance costs without sacrificing acceleration, ride comfort, or cabin quietness.”

The survey comes as the Biden administration continues to push for more Americans to drive EVs, which are significantly more expensive than traditional combustion engine vehicles, in an effort to reduce pollution and reach its goal of ensuring that half of all new vehicles sold in 2030 are zero-emission vehicles.

However, research from the Energy Information Administration shows that electric vehicles currently account for just over 1 percent of new vehicle sales in the United States.

According to automotive research company Kelley Blue Book, the average price of a new electric vehicle in October 2022 was $64,249 which it said was “well above the industry average” and aligned “more with luxury prices versus mainstream prices.”

Meanwhile, the average price of a new gasoline-powered vehicle was $48,182.