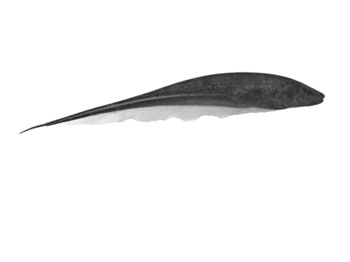 SAVING ENERGY: Sternopygus macrurus regulates the voltage of its electric signals throughout the day. (Scott Schulz/University of Texas)
Science

By Stephanie Lam
Print
You may have heard of bats and dolphins’ ability to echolocate, a means of navigation by vocalizing and receiving the echoes of the sound waves. Electric fish do something similar called electrolocation—they generate an electric field around their bodies and detect the distortions in the field that nearby objects create.

Many fish can detect electric fields, but only electric fish can generate electric fields. They range in the sea and in the fresh waters of Africa and South America. Electric fish include species of rays, knifefish, ray-finned fish, elephant fish, and catfish, but not all members of these taxa (groups of similar species) are electric fish. How about electric eels? They are actually not eels but are a kind of knifefish.

Each electric fish has an electric organ in the tail, which sometimes extends to the rest of the body. The organ consists of modified muscle cells that generate electric signals, known as electrocytes. An electric knifefish, Sternopygus macrurus, is known to emit electric signals at a rate of 100 times per second.

The signals form “a uniform field surrounding the fish, kind of like an electric bubble,” said Dr. Michael Markham, a professor at the University of Texas.

Electroreceptors on electric fish’s skin can detect distortions to the electric field created by nearby objects, and that is how, at night and in murky water, where they often live in, electric fish get to know their world, navigate through it, find their prey, and be aware of the existence of their predators.

“Nearby electric fish can detect each other's electric fields,” Markham said. “Males will modulate the rate or waveform of the electric signal to ‘show off’ to females or to intimidate rival males.”

Since it takes a lot of energy to generate electric signals, Markham and his colleagues started a study investigating how electric fish save energy by varying the voltage of the signals under different circumstances.

They found that at night, or when they are involved in social interactions during the day, Sternopygus macrurus generate signals that are 40 percent stronger in voltage than other times.

“They accomplish this by rapidly inserting more ion channels into the electric organ cells,” said Markham. Ion channels regulate the movement of ions (and in this case, positively charged sodium ions) into cells following the electrochemical gradient.

“By reducing the signal strength during the day, the fish conserve energy because fewer charged ions have to be moved back and forth across the cell membrane,” he said.

However, it remains unknown whether, when various electric fish are within near distances, only one of them would generate the electric field so the others can conserve energy, Markham said.