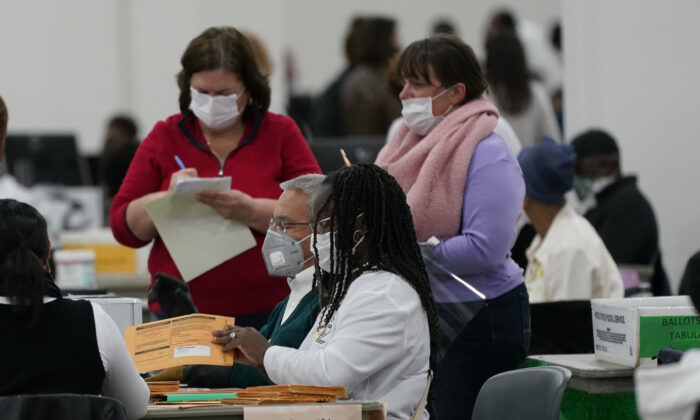 Absentee ballots are processed at the central counting board, in Detroit, Mich., on Nov. 4, 2020. (Carlos Osorio/AP Photo)
By Zachary Stieber

A new election fraud lawsuit alleges that Michigan poll workers were told to backdate ballots and not verify signatures.

The 78-page lawsuit was brought by the Great Lakes Justice Center on behalf of Cheryl Costantino and Edward McCall. While the case is being decided, the plaintiffs are seeking a temporary restraining order on ballot counting in Detroit and Wayne County.

Plaintiffs are asking the court to enjoin the certification of the election, void the election, and order a new vote in Wayne County, where Detroit is located.

“The court has a lot of options, but if they think the fraud is bad enough, the court could void the election and order a new election,” he said.

Jessy Jacob, a City of Detroit elections worker, signed an affidavit saying she was instructed to backdate mail ballots and not to look for any deficiencies with the ballots. She also claimed she was told not to ask for identification when voters arrived to vote in person.

“I directly observed, on a daily basis, City of Detroit election workers and employees coaching and trying to coach voters to vote for Joe Biden and the Democrat Party,” she says in the affidavit, adding that she witnessed them “encouraging voters to do a straight Democrat ballot.”

Zachary Larsen, an attorney and former assistant attorney general for the state of Michigan, said he saw an election official violating guidelines on how to count ballots by adjusting a secrecy sleeve meant to keep individuals’ information private and peeking into envelopes.

A second official was also, at times, removing the secrecy sleeve to observe the ballot.

Larsen said he conferred with another challenger, who said he observed similar irregularities. That challenger raised the issue with a supervisor, who asked, “Why does it matter?” and “What difference does it make?”

Larsen identified another issue. He said he saw ballots being put aside as “problem ballots,” because they lacked a secrecy sleeve even as other ballots that didn’t have the sleeve were being passed along and processed as normal.

A supervisor said the ballots were put into the “problem ballots” box for efficiency, Larsen said.

The former prosecutor also said he was illegally pressured to only observe ballot counting from a distance.

Larsen and a colleague left for lunch and were allegedly not allowed back in when they tried reentering the room. Officials said the room was full.

Another poll challenger, Andrew Sitto, said he was at Detroit’s TCF Center from 9 p.m. on election night into the early hours of the next morning. He said he thought everyone was going home at 4:30 a.m. on Nov. 4 but one of the men in charge of counting announced that a shipment of absentee ballots would be arriving and needed to be counted.

Sitto said he overheard other challengers say that vehicles with out-of-state license plates pulled up outside the center just minutes before and unloaded boxes of ballots. Soon, tens of thousands of ballots were brought in and placed on eight tables. Unlike other ballots that had arrived, the boxes were brought in from the rear of the room.

Every ballot Sitto witnessed being counted was cast for the Democratic presidential nominee. He also overheard counters say ballots they were counting were for Biden.

Biden was declared the winner of Michigan, with a margin of about 145,000 votes, according to unofficial results that haven’t been certified.

A third poll challenger, Robert Cushman, said he witnessed thousands of ballots that were from unknown, unverified persons being counted. When he raised concerns, election supervisors told him the Wayne County Clerk’s Office had “checked them out.”

Cushman said he challenged the entire process because the names were not in the Qualified Voter File or supplemental documents. In addition, all the birthdates were marked as 01-01-1900, he alleged.

The workers continued counting the ballots.

David Fink, lead counsel for the city of Detroit, said in a statement to The Epoch Times that the lawsuit raises “baseless allegations, trying to undermine confidence in a well-run election.

“Like two previous lawsuits, this case is not based upon actual evidence of any election fraud or misconduct. It is based upon various conspiracy theories, which have already been debunked,” he said. “We are confident that this case, like the others filed last week, will be dismissed. There were more than 200 Republican challengers in the room at the TCF Center, but only five such people have come forward to support these claims, which actually tells us how well the process was run.

“In their rush to file this lawsuit, it does not even appear that the supposed witnesses read their affidavits; one witness couldn’t even get his own name right. Everything done here was done for good reason with one goal in mind—to be sure that every vote is counted.”

Another poll watcher, who asked to remain anonymous, told NTD Television that he saw ballots being counted at a slow pace. He said a truck arrived at TCF Center with more ballots at about 4 a.m. on Nov. 5, carrying around 38,000 ballots.

Ivan Pentchoukov and Cathy He contributed to this report.