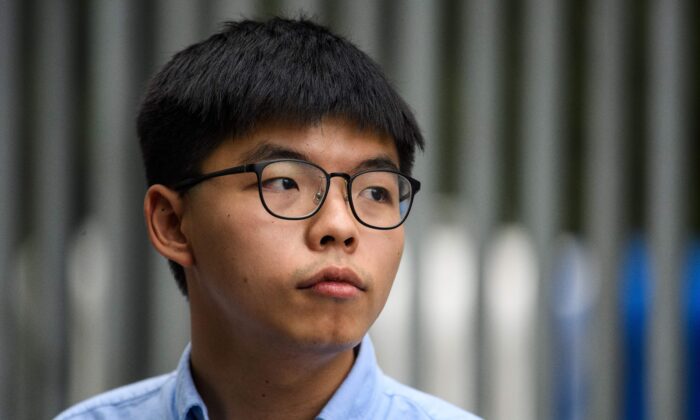 Wong, who was a student leader in the 2014 Umbrella Movement protests, filed his application to run as district councilor in the South Horizons West Constituency as part of the pro-democracy camp on Oct. 4.

Hong Kong’s Electoral Affairs Commission pronounced his nomination “invalid” on Oct. 29, followed by a government statement backing the move. The government said that Wong was promoting “self-determination,” which it said runs contrary to the Basic Law, the city’s mini-constitution.

Wong has expressed on public occasions that he does not support Hong Kong’s independence from mainland China. When questioned by the Electoral Affairs Commission, he said that he believes Hongkongers should have a say over the city’s future, according to local broadcaster RTHK.

The disqualification of Wong has ignited widespread public anger locally and in the United States.

“Beijing bans [Joshua Wong] from running for Hong Kong local District Council in what is supposedly a free election. Not so free, as it turns out,” Sen. Josh Hawley (R-Mo.) said.

“Hongkongers, not the Chinese Communist Party, should decide who leads them,” said Sen. Ed Markey (D-Mass.).

The bill would require the U.S. administration to review annually whether Hong Kong is “sufficiently autonomous” from the communist-ruled mainland China to qualify for the current special trade privileges. It would also mandate the president to hold foreign persons accountable for suppressing human rights on Hong Kong soil.

Similar to Markey, Engel said that the Chinese regime’s erosion of the “one country, two systems” model, which promised Hong Kong a high degree of autonomy upon the 1997 transfer of sovereignty from Britain to China, “must not go unchallenged.”

“Beijing may block Wong, but they are only strengthening the movement for liberty [and] democracy,” Scott said.

He called the election ban “a sign of Communist China’s weakness and fear,” adding that “they know the people won’t stop fighting.”

Some lawmakers also called on the Senate to bring Hong Kong Human Rights and Democracy Act to the voting floor. It has already passed unanimously in the House.

Several human rights groups also criticized the Hong Kong government’s decision, saying that punishing someone like Wong for their political views is a violation of one’s basic rights and will likely backfire.

“At a time when the Hong Kong government should be working to build bridges with pro-democracy leaders, this decision fuels concerns about Beijing’s growing interference in Hong Kong’s affairs and diminishes confidence in the rule of law,” Sarah Cook, senior research analyst at Freedom House, said in a statement.

“The government’s rigging of the electoral process reinforces for many people that the only way to be heard is by protesting on the streets,” she said.

Wong said on Oct. 29 that he will not give up advocacy “just because Beijing doesn’t like me to do so.”

“Everyone would know that the true reason [for disqualification] is my identity,” he said. “Joshua Wong is the crime in their mind.”