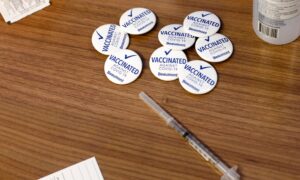 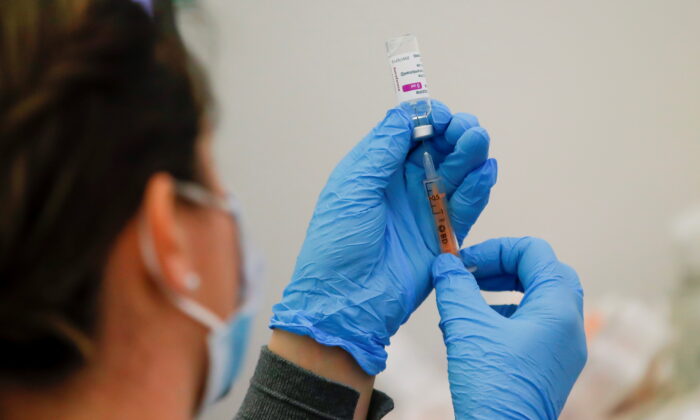 A dose of the AstraZeneca COVID-19 vaccine is prepared in a vaccination centre at Newmarket Racecourse, amid the CCP virus outbreak in Newmarket, Britain, on March 26, 2021. (Andrew Couldridge/Reuters)
UK

The scientists behind the study, which analyzed blood samples from 165 people in Britain aged 80 to 99 who had been given a first COVID-19 vaccine dose, said that finding merited further investigation.

While antibodies can block the coronavirus’s ability to enter human cells, T cells can act as broader protection by attacking and killing any cells that have been infected with the virus.

“These vaccines are both equivalent and effective at inducing antibody responses in the great majority of people [in this study], even after one dose,” said Paul Moss, a professor of hematology at Britain’s Birmingham University who co-led the research.

“Both vaccines are good,” he told a briefing on the findings.

The researchers also found that immune responses were “markedly enhanced” by prior infection with SARS-CoV-2. Across the whole cohort of 165, evidence of previous natural infection was seen in eight donors and associated with 691-fold and 4-fold increases in humoral and cellular immune responses, according to the report.

Helen Parry, clinical lecturer at Birmingham University who co-led the study, said the tests also showed that a larger proportion of those who got the AstraZeneca vaccine had a detectable T cell response.

That finding adds to other emerging evidence from COVID-19 studies suggesting that antibodies—which stop the coronavirus from being able to attach to human cells—may not be the only important element of immunity, and that T-cells may also have an important protective role.

“We now need to carry out further research to understand what this difference in T cell responses means,” Parry said.

Around half of the UK population have had at least one dose of a COVID-19 vaccine, one of the highest rates of inoculation in the world. The vast majority have received either the Pfizer or the AstraZeneca shot.