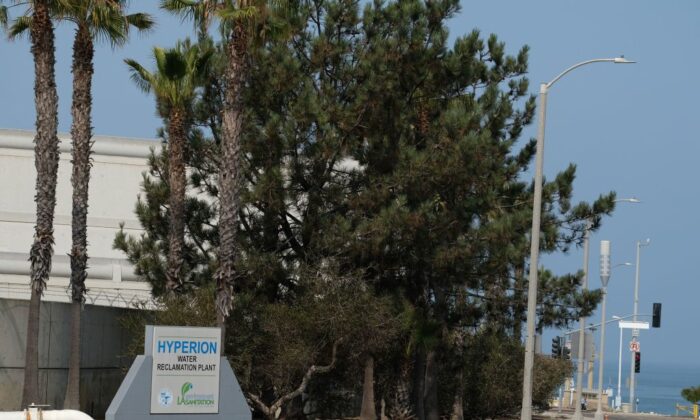 The Hyperion Water Reclamation Plant completed repairs and cleanup last week after a debris backup caused 17 million gallons of sewage to spill into the Playa Del Rey Beach on July 11, but some residents are still frustrated by a lingering sewage smell and delays in the city’s reimbursement program.

“I can’t concentrate, I have nearly daily headaches, dizzy, and just feeling overall lousy since this happened,” resident Sainte Jose DeLude told The Epoch Times in a previous interview.

Nearly two months later, some residents say that things have improved, but the smell lingers.

“The smell isn’t as constant but persists,” DeLude Told the Epoch Times on Sept. 28.

Currently, the only emission coming from the Hyperion plant is hydrogen sulfide, which has remained under the safety threshold of 30 parts per billion throughout September after reaching 70 ppb in July, plant Executive Manager Tim Dafeta told the Los Angeles Daily News.

Resident Jo Franco, who once dubbed the City of El Segundo “Smell Segundo,” said her eye irritation and headaches have gone away, but she expects there will be always be a lingering scent because of the city’s proximity to the Hyperion plant.

“The Hyperion plant always has odors adrift because of what they do,” Franco told The Epoch Times. “They process sewage, and I don’t think technology has reached the point to where there will be an odor free way to process the sewage. It’s all going to boil down to how much odor there is and will be, and the subjective test of what’s tolerable.”

Earlier this month, the Los Angeles city council also moved to instruct the city’s sanitation department to look into improvements that can be made to the department’s public response system, after the public was not immediately warned of the spill.

After an influx of complaints, Los Angeles Sanitation & Environment (LASAN) created a program to reimburse residents of the surrounding area for up to $1,200 for an air purifier or air conditioner, or a hotel room to escape the stench.

The city stopped taking reimbursement applications on Sept. 23, with LASAN officials saying data shows the air quality is sufficient to stop accepting requests. The city will still, however, accept reimbursements receipts from those who applied before the cutoff date until Oct. 8.

So far, 2,350 residents applied for the program, and 709 have been reimbursed, Hyperion spokesperson Tonya Durrell told the Los Angeles Daily News. The city has spent more than $1.4 million on reimbursements, with more than 100 applications awaiting approval.

While some residents say they have received their reimbursements after about one month, others have yet to receive the funds.

DeLude said she filed her reimbursement for an air conditioning unit in early August and has not received a reimbursement as of Sept. 28.

“I charged it to a credit card and it made my excellent score go down to very good, just as I was about to finance a car,” DeLude said.

El Segundo Councilmember Scot Nicol urged the city to extend its reimbursement deadline in a community forum on Sept. 23.

“Things are still not good,” Nicol said during the forum. “The smells are still here; the incident’s not over.”

Nicol suggested that the city give quality of life surveys to residents to fill out, and ask people if they are still bothered by the smell; Nicol also suggested the city vary the times it measures hydrogen sulfide levels.

“The residents need a light at the end of the tunnel,” Nicol said, “not [to be told] told the [hydrogen sulfide odor] readings are low and everything is going to be fine, because it’s not.”

Hyperion spokesperson Tonya Durrell did not respond to a request for comment by press time.