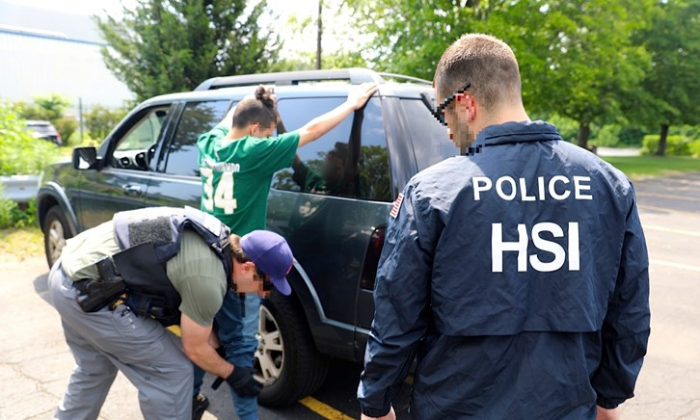 A gang member is arrested during Operation Matador, a 30-day gang sweep in the New York City area in May and June. Of 45 gang members arrested, 39 were affiliated with MS-13. (Courtesy of ICE)
Americas

El Salvador Prepares for Arrival of Gang Members Deported From US

El Salvador is preparing for an influx of violent gang members deported from the United States by creating a register to track their names and activities.

Congress approved the register on June 29, as part of efforts to reduce crime and homicide in the impoverished Central American state.

The country has some of the highest homicide rates in the world.

A 12-year civil war from 1989-1992 saw extreme violence used by both sides, including the deliberate terrorizing of civilians by death squads and the use of child soldiers.

That horror gave birth to some of the most violent criminal gangs in the world.

Previous efforts to deport the gang en masse led to it being established in El Salvador.

This time the government there hopes to be better prepared.

The register will allow police to identify and track the activities of gang members.

The newly passed law also compels gang members to complete their educations, get professional training and do public service.

Those listed on the register are prohibited from drinking alcohol or doing drugs. They also can’t meet with others in certain prohibited areas.

The register will come into existence just as President Donald Trump begins to get his immigration agenda moving forward.

The Republican-controlled Senate has two piece of legislation before it that have already passed the House of Representative. One cuts federal funding for cities that refuse to enforce immigration laws, so-called “sanctuary cities.”

The other, known as “Kate’s Law” increases punishments for illegal immigrants that return after having already been deported.

Deportation of Salvadorian citizens is already up 1.1 percent on the same period last year.

Official migration statistics show that between January and May, 7,653 Salvadorian citizens were deported from the United States.

Of that total, only 398 were identified as gang members.