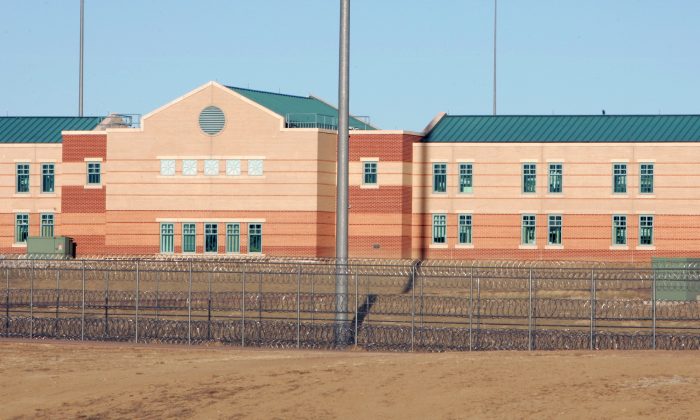 El Chapo Likely Headed to ‘Supermax’ Jail Nobody Ever Escaped From: Dubbed ‘Alcatraz of the Rockies’

Joaquin “El Chapo” Guzman, the Mexican drug lord found guilty of running a criminal empire and infamous for twice escaping from prison is likely headed to a “supermax” prison from which no inmate has ever escaped.

Dubbed the “Alcatraz of the Rockies” after the prison in San Francisco that held the notorious gangster Al Capone and other criminals, the Administrative Maximum Facility (ADX) in Florence, Colorado, was built to house the most dangerous inmates.

“ADX is the kind of prison that was designed for a high-profile inmate like El Chapo,” Larry Levine, a former federal inmate who is the director and founder of Wall Street Prison Consultants, told Reuters in a phone interview.

A Brooklyn jury on Feb. 12 found Guzman, former head of the notorious Sinaloa cartel, guilty of operating a continuing criminal enterprise, use of firearms, and various charges of conspiracy to import and distribute cocaine, heroin, and marijuana, The Associated Press reported.

U.S. Attorney for Eastern District of New York, Richard Donoghue, told Reuters on Feb. 12, the day the guilty verdict was announced, that Guzman was responsible for a litany of crimes.

“In sum, the jury found that Guzman led the Sinaloa Cartel, one of the largest and most dangerous drug cartels in the world, and that he is responsible for violence, including murders, and the smuggling of massive amounts of narcotics into the United States over a period of decades.”

Guzman faces up to life in prison, and his sentencing date is June 25.

“This conviction, we expect, will bring a sentence of life without the possibility of parole,” Donoghue said. “It Is a sentence from which there is no escape and no return.”

While U.S. authorities have been tight-lipped about where Guzman will be imprisoned, the Supermax jail located about 115 miles south of Denver is widely anticipated as being El Chapo’s designated lockup.

“Given his history of escapes, it’s likely that’s where he will go,” said Martin Horn, a professor of corrections at John Jay College of Criminal Justice, in an interview with Fox News. “But it’s not a foregone conclusion.”

The “Alcatraz of the Rockies” is the prison where the U.S. Bureau of Prisons (BOP) keeps inmates too dangerous to house anywhere else, Atavist magazine reported.

Prisoners at ADX are held in specially designed “control units” that function as prisons within prisons.

ADX Florence’s most infamous inmates include Ramzi Yousef, mastermind of the 1993 bombing of the World Trade Center in New York; convicted Boston Marathon bomber Dzhokhar Tsarnaev and Unabomber Ted Kaczynski, according to the BOP website.

Guzman, 61, previously broke out of two maximum-security Mexican prisons before he was captured and extradited to the United States.

He became a folk legend of sorts in Mexico for orchestrating his two breakouts.

On one occasion in 2001, El Chapo broke out of a top-security prison in a laundry bin with the help of bribed guards.

“One of them—Francisco Camberos Rivera, known as El Chito, or the Silent One—opened the door to El Chapo’s cell and helped him climb into a cart of dirty laundry,” Time reported. “They headed down unguarded hallways and through wide-open electronic doors to the inner parking lot, where only one guard was on duty. El Chapo jumped out of the cart and leaped into the trunk of a Chevrolet Monte Carlo.”

He was caught several years later and again incarcerated in a maximum security facility, from which he promptly broke out of through a tunnel.

About a year later, on Jan. 8, 2016, he was recaptured after a shootout with Mexican marines in which five people were killed.

‘Worst of the Worst’

Ending up at ADX would make it nearly impossible for him to repeat his past escapades.

“For someone like Guzman, the chances of escape from a facility like that are nil,” said L. Thomas Kucharski, a professor at John Jay College of Criminal Justice in New York.

ADX has special restrictions in place designed to ensure some inmates have no way to project influence beyond prison walls. They have virtually no contact with the outside world, preventing inmates from liaising with or calling shots in criminal empires on the outside.

Inmates are held in specially designed “control units” that function as prisons within prisons.

Those incarcerated at ADX are confined to tiny single-person cells for all but one hour a day.

ADX inmate Mahmud Abouhalima, who was involved in the 1993 World Trade Center bombing, described life in his cell on Cell Block H in the supermax jail, according to Boston.com.

“Sitting in a small box in a walking distance of eight feet, this little hole becomes my world, my dining room, reading and writing area, sleeping, walking, urinating, and defecating,” Abouhalima said in a declaration submitted as part of a civil rights lawsuit.“I am virtually living in a bathroom, and this concept has never left my mind in ten years.’’

“It’s the most secure, most controlled, most confined unit in the prison,” former BOP warden Joe Gunja told New York Daily News. “It’s designed for the worst of the worst inmates.”

Convicted on all Counts

His lawyers have released a statement to say they plan to appeal the conviction and that despite the guilty finding, he was “upbeat.”