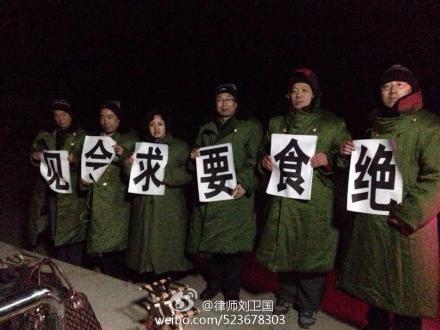 Back on March 20, the lawyers Tang Jitian, Jiang Tianyong, Wang Cheng, and Zhang Junjie were detained by Jiansanjiang police after they attempted to offer legal assistance for three local Falun Gong practitioners who had been held for brainwashing. While the lawyers were detained, they were tortured, resulting in a total of 24 broken ribs and other injuries.

On Dec. 17, there was heavy security outside Jiansanjiang’s Qianjin Court. The car carrying five of the attorneys seeking to defend the detained Falun Gong practitioners was stopped by police after the officers saw the lawyers’ licenses. The police held the car and the lawyers for an “illegal operation,” according to one of the lawyers, Lin Qilei.

“[Then] we tried to take a bus, but the police told bus driver not to let us in,” Lin told Epoch Times on the phone.

After being withheld for nearly an hour in the -22 degrees Fahrenheit weather, the five lawyers successfully got into two taxis, and made it to the court, the lawyers said.

After the pretrial conference in the morning, the court started at 1 p.m. and progressed slowly due to multiple court adjournments, with the defense lawyers challenging procedural issues.

One of the litigants, Shi Mengwen, was wearing only an unlined garment and slippers in such harsh weather because the detention center didn’t allow him to wear a heavy coat, attorney Wang Quanzhang told Epoch Times. “It’s unbelievable! … We [lawyers] even felt cold with heavy cotton coats on. Jiansanjiang detention center has no humanity at all!”

After protesting to the court several times, the court eventually provided a coat for Shi, lawyer Wang said.

The court decided to continue the trial on Dec. 18.

The actions of the lawyers defending the Falun Gong practitioners in Jiansanjiang has attracted widespread respect and support from Chinese lawyers and society. “The lawyers circle didn’t give in,” lawyer Li Fangping remarked on social media Weibo.

Another Chinese lawyer Liu Jinxiang commented, “No matter how dark and cold it is, the fight will never stop! Today’s Jiansanjiang trial will definitely be recorded in history!”

Tang Jitian, one of the four lawyers tortured in the Jiansanjiang police station in March, appealed for international attention to the human rights issue in China. “If such problems can’t be stopped, I believe that the human rights standard of the whole world is dragged down,” Tang told Epoch Times.