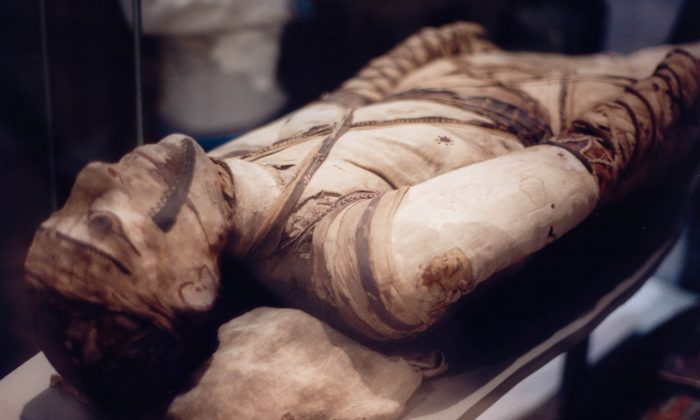 An Egyptian mummy at the British Museum in London. (Wikimedia Commons)
Science

Egyptian Mummies—to Unwrap or Not to Unwrap?

Napoleon’s conquest of Egypt at the end of the 18th century sparked a European interest in ancient Egypt. This ‘Egyptomania’ has gripped Europe ever since, and is still visible today. It was gold, pyramids, and above all, mummies, which fascinated not just the people of Europe, but societies across the globe.

When they first shot to superstardom, mummies were not accorded the respect that they deserved. The elites of Victorian society often threw so-called ‘mummy unwrapping parties,’ in which mummies were literally unwrapped before an audience. In England, the leading proponent of mummy ‘unrollings’ was Thomas Pettigrew, a surgeon and antiquarian who was also a mix of scholar and showman. His unrollings were held in various settings, at public venues such as the Royal Institute, or in private gatherings, in which he would unwrap and sometimes autopsy a mummy for the education and entertainment of his guests. Nevertheless, it may be stressed that these were not usually done at social gatherings, but within an academic context.

In 1908, Margaret Murray, the first woman to be appointed as a lecturer in Archaeology in the UK, supervised the unwrapping of a 12th Dynasty mummy, Khnum-Nakht in Manchester. This was performed in front of an audience of 500 people. Despite this academic setting, it many ways one could compare the morbid curiosity and spectacle surrounding Egyptian mummies in the 19th and 20th centuries with ‘freak shows,’ in which the subject was gawked at by onlookers.

While such public demonstrations are deemed unacceptable and unethical today, it was certainly not the case back then.  The state of academia then and now is very different, and perhaps we should not be so quick to judge the actions of mostly well-intentioned scholars of the 20th century, based on 21st century perspectives.

The hysteria and sensational events involving Egyptian mummies may have been tempered somewhat since then, but the fascination with them certainly has not. Today, the physical unwrapping of mummies is generally frowned upon, and ethics guidelines suggest that mummies are not unwrapped unless there is an overwhelming reason to do so.  But this has not curtailed the efforts of passionate academics eager to learn more. They have simply found new methods; instead of physically stripping the mummies, they can now be unwrapped digitally. This is done via computed tomography (CT) scanning. Through these scans, virtual maps of the mummies can be produced, and their insides can be seen without the necessity to destroy or damage them. This has provided researchers with some of the information needed to reconstruct the lives of these individuals.

The virtual unwrapping of mummies does not stop with scholars, however. For instance, visitors to Stockholm’s Medelhavsmuseet, the Museum of Mediterranean and Near Eastern Antiquities, have the opportunity to peer beneath the bandages of some of the mummies there. A new permanent exhibition in this museum will feature eight mummies that have undergone digital scans which will enable their viewers to digitally unwrap them. These mummies include an Egyptian priest, Neswaiu, who is currently on display, a seven year old temple singer, and a doorkeeper.

While new methods are an improvement to those carried out in the past, the question remains – should we interfere with the mummies at all?  The process of preparing a deceased individual for the afterlife was heavily ritualized and had great meaning attached to it for the ancient Egyptians. The fact is, the bodies were not designed to be seen.

“Rather than crude unwrappings as a form of public entertainment, these mummies are explored with scientific rigour and respect. Instead of revulsion, we are encouraged to feel a sense of shared humanity; they are dignified through the small detail of daily life – from the wigs they wore to the beer they drank. However, there is still a feeling that they do not belong to us and should not be here.”