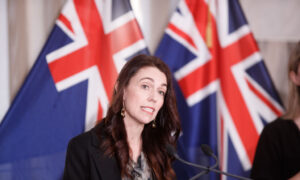 A flight attendant who was named as a victim on an EgyptAir flight that disappeared—and likely crashed—on Thursday posted an image of a plane crashing into the water on Facebook about a year before the plane went down.

Samar Ezzeldin, or Samar Ezz Eldin, had been a flight attendant for EgyptAir for two years and had recently got married, relative Mervat Mounir told The Guardian. “They haven’t said anything to us. We have no information,” Mounir said.

Ezz Eldin had posted a picture of a plane crash, with a female flight attendant in wet clothes pulling a suitcase out of the water.

The 27-year-old was among the first victims named.

“I lost one of my best friend i’ve ever had u broke my heart may god rest your purest soul in peace i love you good bye my friend, Samar Ezz Eldin ‘flight attendants dont die they go high’ you will be missed,” her friend Asma Yasser, who is also a member of EgyptAir cabin crew, said, according to the Evening Standard.

The flight was en route from Paris to Cairo with 66 people on board.

Debris from the plane has been found in the Mediterranean Sea, officials said. They’re now trying to search for the plane’s flight recorders, called black boxes.

The Egyptian military said that the wreckage of the plane was found. Personal belongings, including suitcases, and human remains were found, CNN reported.

Egyptian officials said they suspect terrorism was the cause of the plane’s disappearance. The flight went off radar early on Thursday morning as it was flying to Cairo in what should have been a 3.5-hour-long flight.

Meanwhile, more victims of the EgyptAir disaster have been named. They include British national Richard Osman, a geologist, and former TV actress Mervat Zakaria.