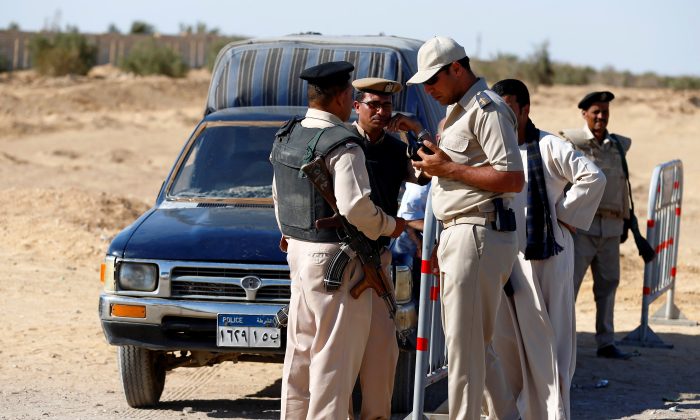 Security guards stand near the site of an attack that killed at least 26 people in Minya, Egypt on May 26, 2017. (REUTERS/Mohamed Abd El Ghany)
Middle East

MINYA, Egypt—Egyptian air force planes on Friday carried out strikes directed at camps in Libya where Cairo believes militants responsible for a deadly attack on Christians earlier in the day were trained, Egyptian military sources said.

Egyptian President Abdel Fattah al-Sisi said he had ordered strikes against what he called terrorist camps, declaring in a televised address that states that sponsored terrorism would be punished.

The sources said six strikes took place near Derna in eastern Libya at around sundown, hours after masked gunmen attacked a group of Coptic Christians traveling to a monastery in central Egypt, killing 28.

The Egyptian military said the operation was ongoing and had been undertaken once it had been ascertained that the camps had produced the gunmen behind the attack on the Coptic Christians in Minya, central Egypt, on Friday morning.

“The terrorist incident that took place today will not pass unnoticed,” Sisi said. “We are currently targeting the camps where the terrorists are trained.”

He said Egypt would not hesitate to carry out further strikes against camps that trained people to carry out operations against Egypt, whether those camps were inside or outside the country.

The Egyptian military posted footage online of pilots being briefed and war planes taking off for the raids.

There was no immediate claim of responsibility for the attack on the Christians, which came on the eve of the holy month of Ramadan. It followed a series of church bombings claimed by the ISIS terrorist group in a campaign of violence against the Copts.

ISIS supporters reposted videos from earlier this year urging violence against the Copts in Egypt.

At a nearby village, thousands later attended a funeral service that turned into an angry protest against the authorities’ failure to protect Christians.

“We will avenge them or die like them,” mourners said, while marching with a giant wooden cross.

Eyewitnesses said masked men opened fire after stopping the Christians, who were in a bus and other vehicles on a desert road. Local TV channels showed a bus apparently raked by gunfire and smeared with blood.

Clothes and shoes could be seen lying in and around the bus, while the bodies of some of the victims lay in the sand nearby, covered with black sheets.

The attack, which Egypt’s Muslim leaders condemned, happened 10 miles from the monastery, a security official on the scene told Reuters.

The injured were taken to local hospitals and some were being transported to Cairo. One of the vehicles attacked was taking men to carry out maintenance work at the monastery while another had children on board, officials said.

Dozens of people gathered at the emergency area of a local hospital. Some carried a wooden coffin to a hearse.

The Health Ministry said that among those injured were two children aged two.

President Donald Trump, who has made a point of improving relations with Cairo, said America stood with Sisi and the Egyptian people.

“This merciless slaughter of Christians in Egypt tears at our hearts and grieves our souls,” Trump said.

The attack “steels our resolve to bring nations together for the righteous purpose of crushing the evil organizations of terror, and exposing their depraved, twisted, and thuggish ideology.”

The grand imam of al-Azhar, Egypt’s 1,000-year-old center of Islamic learning, said the attack was intended to destabilize the country.

“I call on Egyptians to unite in the face of this brutal terrorism,” Ahmed al-Tayeb said from Germany, where he was on a visit. The Grand Mufti of Egypt, Shawki Allam, condemned the perpetrators as traitors.

The Coptic church said it had received news of the killing of its “martyrs” with pain and sorrow.

Pope Francis, who visited Cairo a month ago, described the attack as a “senseless act of hatred”.

The attack took place on a road leading to the monastery of Saint Samuel the Confessor in Minya province, which is home to a sizable Christian minority. An Interior Ministry spokesman said the unidentified gunmen had arrived in three four-wheel-drive vehicles.

Security forces launched a hunt for the attackers, setting up dozens of checkpoints and patrols on the desert road.

Coptic Christians, whose church dates back nearly 2,000 years, make up about 10 percent of Egypt’s population of 92 million.

They say they have long suffered from persecution, but in recent months the frequency of deadly attacks against them has increased. About 70 have been killed since December in bombings claimed by Islamic State at churches in the cities of Cairo, Alexandria and Tanta.

An ISIS campaign of murders in North Sinai prompted hundreds of Christians to flee in February and March.

Christian Persecution in China on the Rise: Report

Copts fear they will face the same fate as brethren in Iraq and Syria, where Christian communities have been decimated by wars and Islamic State persecution.

Egypt’s Copts are vocal supporters of Sisi, who has vowed to crush Islamist extremism and protect Christians. He declared a three-month state of emergency in the aftermath of the church bombings in April.

But many Christians feel the state either does not take their plight seriously enough or cannot protect them against determined fanatics.

The government is fighting insurgents affiliated with Islamic State who have killed hundreds of police and soldiers in the Sinai Peninsula, while also carrying out attacks elsewhere in the country.