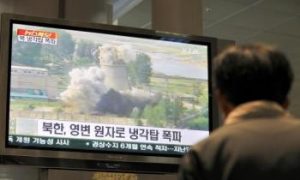 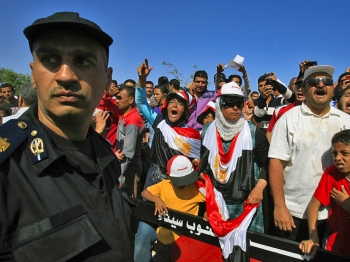 An Egyptian policeman stands guard as protesters shout slogans against ousted President Hosni Mubarak outside the Sharm el-Sheikh International Hospital in the resort town on April 13. Mubarak was admitted to intensive care after he reportedly suffered a heart attack during questioning by prosecutors. (AFP/Getty Images)
Middle East

Deposed Egypt President Hosni Mubarak and his two sons were detained pending charges over allegations of abuse of power, public money squandering, and killing protesters during the popular uprisings in Egypt two months ago. The arrests were long awaited by the Egyptian people. Mubarak had been under house arrest in the resort town of Sharm El Sheikh since he resigned his office in February.

The announcement comes a day after Mubarak was admitted to hospital with a heart attack. In hospital, while being questioned by prosecutors regarding the charges of corruption and the killing of 800 protesters, his condition worsened, according to the Egyptian Radio and Television Union. The ex-leader is accused of ordering police to fire on protesters during the unrest that ultimately ousted him from power after three decades.

While in the hospital on Tuesday, Mubarak reportedly refused to eat or drink in protest of his sons being taken to a Cairo prison for questioning. Doctors at the hospital said Mubarak’s condition was “somewhat stable,” according to state-run Nile TV.

Rumors are currently flying in Egypt about what exactly has happened. According to media reports, some people think Mubarak’s heart problems were a plot by the caretaker government, Supreme Council of Armed Forces (SCAF), to help their former leader to escape prosecution.

“A lot of Egyptians, particularly in Tahrir Square, said this is just ridiculous, this is a lie, it’s a game. … They even accuse the army—the new rulers in this country in the interim phase—of actually orchestrating this to find some way out so Mubarak won’t be prosecuted,” reported Al Jezeera.

Anti-government activists had largely been supportive of the military when it assumed interim power while democratic elections were organized. However, the SCAF has since detained hundreds of activists, officially banned demonstrations, and is seen to be siding with the former president, causing growing tensions in the country. News of the arrest of Mubarak and his sons may help extinguish some of those tensions.

The SCAF has already arrested many former ministers under Mubarak, including former Prime Minister Ahmed Nazif.