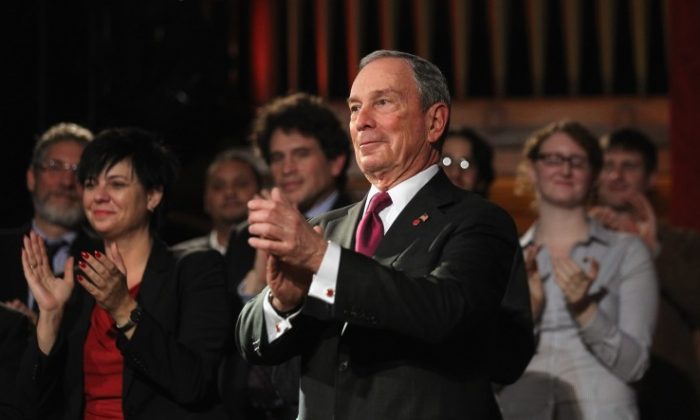 Mayor Michael Bloomberg applauds after delivering his annual State of the City address at Morris High School Campus on Jan. 12, in the Bronx borough of New York City. (Mario Tama/Getty Images)
US

Education Key in Mayor’s 2012 State of the City Address

NEW YORK—Mayor Michael Bloomberg lauded the changes he has made since taking control of the schools system and revealed his education plan for 2012 in his State of the City Address given at the Morris High School Campus in the Bronx on Thursday.

Step one, says Bloomberg, is attracting the best teachers. He will offer $20,000 raises to all teachers who rate “highly effective” for two consecutive years. He plans to attract top graduates from teacher colleges by offering grants of $25,000 to pay off their student loans if they teach in New York City.

“How do we determine which teachers are highly effective?” asked Bloomberg. He admitted that the teacher evaluation system is flawed. “It is a pass-fail system with a 98 percent pass rate,” said the mayor.

He will create school-based committees to evaluate teachers at 33 schools as a pilot to “remove those who just don’t make the grade.” Bloomberg also wants to provide extra training and tools to help teachers improve. Bloomberg says the teachers’ union resisted his plan to fire the teachers and will push forward with or without union support.

He will open three additional schools modeled after one he opened last year that is partnered with IBM. It runs from grade 9 to 14 and students graduate with a high school diploma, an associates degree, and a potential job at IBM. One of the new schools will open in the Bronx. Over the next two years, he will close 25 schools and open 100 smaller schools, including 50 charter schools.

His plan also includes a software engineering academy in Union Square, close to many of the city’s technology companies.

He will also support the DREAM Act, which will allow immigrants who came to America illegally before they were 16 years old to qualify for grants to go to college.