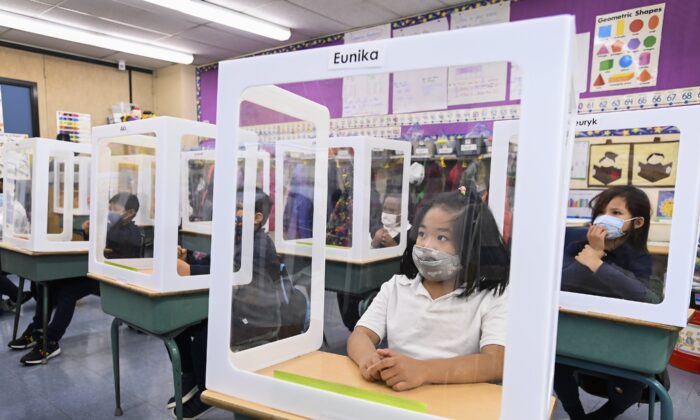 Children wearing masks sit behind screened in cubicles as they learn in their classroom at St. Barnabas Catholic School during the COVID-19 pandemic in Scarborough, Ont., on Oct. 27, 2020. (Nathan Denette/The Canadian Press)
Business Columnists

Education Is in Shambles

The single most bizarre aspect of the COVID-19 pandemic policy response was the shutting of schools, public and private. One country never did that—Sweden—and the results were fabulous: zero deaths and zero educational losses. That this was the right choice should have been obvious from the beginning.

COVID-19 was never a serious threat to kids, mercifully.

In those fateful days, 55 million U.S. kids were suddenly sent home, and their parents’ lives were massively disrupted to care for them and oversee their education. That happened for those lucky enough to be able to homeschool—a practice once nearly illegal and then suddenly made mandatory—but for millions of kids, they simply slipped through the cracks, some losing as much as two years of education.

When the kids finally went back, they faced a coronaphobic environment with mandatory masking, as well as a general message that they and their friends are disease vectors and that they had better comply. They were hit with rolling lockdowns in the name of track-and-trace, along with the pathological futility of somehow forever slowing the spread.

The result is a mental health crisis coupled with a dramatic decline in reading and math scores. We really are talking about a lifetime trauma, far worse than a natural disaster. It was entirely man-made. It should raise fundamental doubts about the wisdom of our overlords.

So why did the shutdown happen?

As far as I can tell, such an egregious policy response has been baked into the modeling since 2006. The nonmedically minded computer programmers who put together the whole idea of disease avoidance through “social distancing” developed an obsession with stopping schools, particularly ending school buses. In their view, kids are uncontrollable disease spreaders, so the only option is to put a stop to the whole enterprise.

An earlier modeling exercise for lockdowns written by Neil M. Ferguson of Imperial College London and published in Nature just assumed that school closures would reduce the “attack rates” of a virus by 40 percent. This was echoed in 2006 by Robert Glass and his top two acolytes, Richard Hatchett and Carter Mecher, both of whom were pushing hard for school closures throughout February 2020 and somehow managed to get their way.

“Just watch kids with runny noses and coughing and sneezing and touching one another (especially the younger ones),” Veterans Administration consultant Mecher wrote in March 2020 to public health officials all over the country. “You couldn’t design a better system to spread disease. Schools and daycare centers are clearly amplifiers of disease transmission. … We can guarantee that if the US does not close schools now, they will eventually close all the schools and universities out of desperation.”

As for the downside, forget about it, he said.

“We don’t need to exhaust ourselves searching for perfect solutions to address all these challenges associated with the 2nd and 3rd order consequences of school closure.”

Strange how Mecher otherwise stayed out of the public eye for the duration of the pandemic.

In the big picture of things, the school shutdowns made absolutely no sense either epidemiologically or politically. The public school system in this country has been considered the crown jewel of Progressive achievements for more than 100 years. They began in this country in the 1880s at the state level as an effort to Americanize immigrant communities. They gradually became part of the normal function of government at all levels.

One might have supposed that the ruling class establishment would protect the schools above all else, not shut them down for fear of a virus that poses a near-zero risk to the kids. The flu pandemics of 1958 and 1969 didn’t cause this, and not even the polio scares of the 1940s were enough to force school closures. That it all happened in 2020 is a measure of just how bonkers the world became nearly overnight.

Now there’s a real crisis at work in even finding teachers, many of whom have been massively demoralized not only from the closures but also the vaccine mandates. The Washington Post reports that “rural school districts in Texas are switching to four-day weeks this fall due to lack of staff. Florida is asking veterans with no teaching background to enter classrooms. Arizona is allowing college students to step in and instruct children. The teacher shortage in America has hit crisis levels—and school officials everywhere are scrambling to ensure that, as students return to classrooms, someone will be there to educate them.”

This problem is coupled with the huge demographic upheaval of parents with young families fleeing the blue states for red ones in search of a better place to raise the ones they love the most.

This might also be a tremendous opportunity for reform—dramatic reform. The education question shouldn’t actually be too difficult for any society that considers itself to be free. Parents want their kids to be educated, and many institutions and people are thrilled to be part of the project. It might be heresy to say it, but consider that the entire industry would be better off without any government involvement at any level.

There’s no reason why the entire sector should be treated like something uniquely requiring government intervention to make possible. We know now that government can’t be trusted in this realm. In fact, this trust may never return. Public schooling was already entering a crisis phase with curricula ever more detached from parents’ wishes and kids being treated inhumanely in an increasingly mechanized and bureaucratized system heavy with administrative expense.

The issue of homeschooling should at least be fully settled by now. Anyone who wishes to do so should be free to do so. But what about myriad hybrid schools that combine family, community, religious institutions, and civic associations? Most states have far too many regulations—including teacher certifications and curriculum requirements, as well as laws on compulsory attendance—that make the formation and development of more complex solutions too difficult.

If the Republicans are looking for solutions here, they should start with getting the federal government entirely out of the picture, starting with the immediate abolition of the Department of Education, which has done nothing to improve educational systems and much to inhibit innovative solutions at the local level.

It’s also time to revisit the issue of so-called child labor laws (imposed only in 1938) that stop hybrid school-work solutions and end up conscripting kids into an inhumane environment for 12 years. It’s pointless. Even now, kids on family farms (and also child actors!) are free to enjoy employment while also pursuing school studies. This right needs to be extended to everyone. It’s preposterous that a 13-year-old can’t legally serve a sandwich in a local shop and get paid to do so.

Beyond that, deregulation of the entire educational sector should be the main theme here. And the system of funding needs dramatic change, too. Right now, it’s tied to property taxes, which, in turn, are linked to the system of school districts, which profoundly affects housing prices and ends up making most schools “public” in name only. A just system would link payments made to services provided, just as with private schools.

The system we have now is in the midst of an unsustainable crisis that’s crying out for dramatic change. The incredible irony is that U.S. educational institutions were massively disrupted and even wrecked by the very same crowd that built them in the first place. Even The New York Times is publishing writers who now say they never should have closed.

Indeed, but for all the catastrophic results, at least it has created a giant opportunity for massive reform that rejects the top-down, property-tax-funded, bureaucratically controlled model rooted in control, coercion, and compulsion, in favor of a system better suited to a free people. The way to prevent school lockdowns from ever happening again is to create a giant wall between government and education, then let millions of flowers bloom.