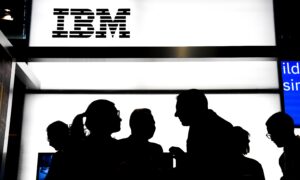 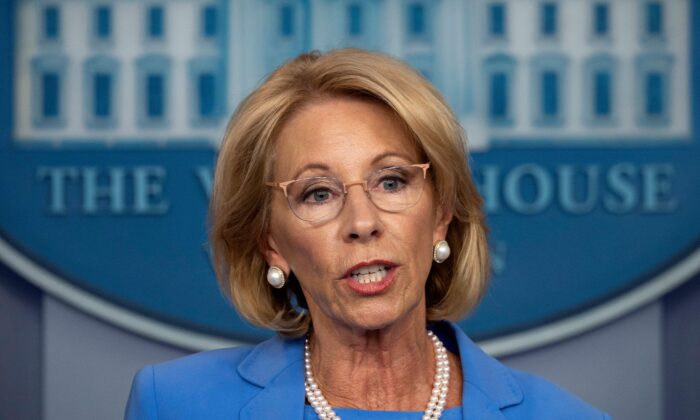 U.S. Secretary of Education Betsy Devos speaks during a daily briefing on COVID-19, in the Brady Briefing Room at the White House on March 27, 2020. (Jim Watson/AFP via Getty Images)
China-US News

The University of Alabama (UA) has been asked by the Department of Education (ED) to provide records of any contracts, gifts, or donation agreements it may have had with dozens of China-funded companies and institutions listed by the department.

The request was sent in a Dec. 22 letter (pdf) from the ED’s office of the general counsel to the university’s president. The letter starts by pointing out that under Section 117 of the Higher Education Act of 1965, institutions of higher education are required to report any gifts or contracts “from or with a foreign source.”

Companies such as Huawei Technologies Co. were listed in the letter, as well as a number of China-based universities such as Chengdu Technological University and Jilin University.

The letter from Reed Rubinstein, the principal deputy general counsel, also states, “It appears that UA has failed to report an alleged partnership with the Wuhan Institute of Virology (“WIV”), in Wuhan, China.”

The university denies such a partnership exists and says it has alerted the department.

“The UA reference on the Wuhan Institute of Virology website was brought to our attention earlier this year. At that time, we reviewed any possible related institutional records to determine the basis for the reference,” the University of Alabama told The Epoch Times in a Dec. 23 email.

“We found no ties or connection between UA and WIV, and no reason for UA to be listed on the website.

“University officials reached out to WVI to question the reference and requested the UA reference on the website be removed, but never received a response. We have relayed this information to the Department of Education.”

In May, President Donald Trump suggested he had seen evidence pointing to the CCP virus originating at the Wuhan Institute of Virology, a top-level lab where researchers have studied how coronaviruses jump to humans from animals.

The Office of the Director of National Intelligence said in April that intelligence agencies concluded the virus wasn’t man-made or genetically modified.

A recent investigation by the Education Department found that U.S. universities failed to report $6.5 billion in foreign gifts and contracts. Education Secretary Betsy DeVos noted the findings of the investigation at an Oct. 20 event, alongside officials from the Justice Department and the State Department.

“The threat is real, so we took action to make sure the public is afforded the transparency the law requires,” DeVos said at the time. “We found pervasive noncompliance by higher-ed institutions and significant foreign entanglement with America’s colleges and universities.”

Universities reported receiving a total of more than $19.6 billion in foreign gifts and contracts from 2014 to 2020, including nearly $1.5 billion from China, almost $3.1 billion from Qatar, and more than $1.1 billion from Saudi Arabia, according to historical ED data and the most recent figures posted on its new online reporting portal.

The vast majority of the foreign funds went to America’s largest and most prestigious universities, which have received billions of dollars through a bevy of intermediaries, according to a report released by the ED on Oct. 20.

All the institutions involved are in the meantime dependent on tens of billions of U.S. taxpayer subsidies while operating largely “divorced from any sense of obligation to our taxpayers or concern for our American national interests, security, or values,” the report (pdf) states.