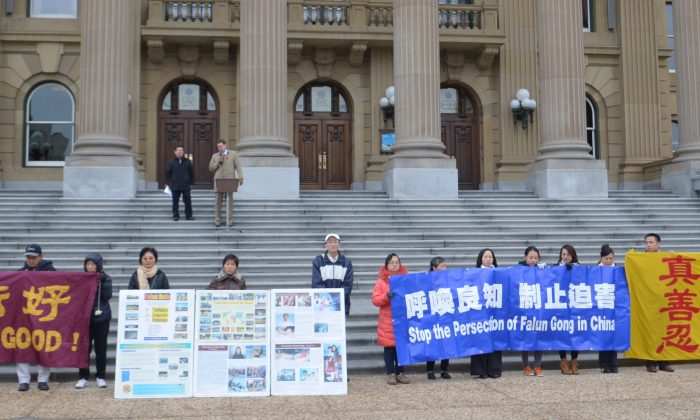 Brent Rathgeber, MP for Edmonton-St. Albert and chair of the Parliamentary Friends of Falun Gong, speaks at a rally organized ahead of Prime Minister Stephen Harper's visit to China at the Alberta Legislature in Edmonton on Nov. 4, 2014. The rally was held by the Falun Dafa Association of Edmonton to ask the prime minister to publicly ask Chinese authorities to release imprisoned Falun Gong practitioners, to end the persecution of Falun Gong, and to end the practice of forced organ harvesting from living prisoners of conscience. (Shar Chen/Epoch Times)
Canada

EDMONTON—Robin Li’s sister, Hong Li, was arrested two years ago in China for practicing Falun Gong and was sent to prison.

Now Li, a Chinese-Canadian software engineer living in Edmonton, wants Prime Minister Stephen Harper to ask for the release of Hong Li publicly when he meets with Chinese authorities on his trip to China this week. He also wants Harper to ask for an end to the persecution of Falun Gong and the killing of prisoners of conscience for their organs.

“The thought that my sister may be at risk of being killed for her organs makes me shiver to the bone,” Li said at a rally organized by the Falun Dafa Association of Edmonton at the Alberta Legislature on Nov. 4.

Falun Gong or Falun Dafa, a traditional meditation practice, is severely persecuted by the Chinese Communist Party in China.

Investigations by former Edmonton MP David Kilgour and Winnipeg human rights lawyer David Matas, as well as American journalist and author Ethan Gutmann, show that the Chinese regime uses organs from prisoners of conscience, particularly Falun Gong, to sell for profit. The victims are kept alive only until their organs are sold, dying on the operating table to maximize the viability of their organs.

“Let me add my voice to your voice, and the voices of millions of Canadians, and most members of Parliament, that human rights issues can never be lost in these trade missions,” Brent Rathgeber, MP for Edmonton-St. Albert and chair of the Parliamentary Friends of Falun Gong, said at the rally.

“The ability to do business with other companies and other countries … has to be linked with respect for human rights, respect for practitioners, the rule of law, and specifically to end the persecution of individuals who are involved in peaceful meditation and exercise regime which is Falun Dafa, and forced harvesting of organs for no other reason than the Chinese government doesn’t accept the peaceful practice of Falun Dafa.”

Li’s sister Hong Li was arrested on Oct. 30, 2012, while she was at a shopping centre. The police told her she was detained for exposing the persecution of Falun Gong online and on her cellphone. After 17 months at a detention centre, Hong Li was sentenced to 3.5 years in the Shenyang Women’s Prison in Liaoning Province, a prison notorious for persecuting Falun Gong practitioners.

According to Li, Liaoning province is where many of the concentration camps of live organ harvesting are located.

Li is also concerned about his elderly parents who are in their eighties, since with his sister imprisoned, there is no one to care for his parents. Li, himself a Falun Gong practitioner, can’t go back to China as he fears he would be targeted for persecution.

“I hope the prime minister will raise this point publicly with the Chinese officials he meets during his upcoming visit, and publicly asks for the release of my sister Hong Li, and also asks for an end to the persecution of Falun Gong and the practice of forced live organ harvesting,” Li said at the rally.

Other Falun Gong adherents in Edmonton also spoke at the rally, talking about their personal experiences facing persecution in China.

Ms. Chen said she was first abducted by police when she was pregnant in 2001, and said the experience had long-term effects on the mental well-being of her child. Her career as a TV reporter was also affected and she was forced to work as a cashier. But that wasn’t the end of it; she was arrested again in 2008 for talking about Falun Gong online with her sister.

“They illegally detained me and interrogated me, not allowing my family to know my whereabouts and situation.”

She eventually had the opportunity to come to Canada this year, but she can’t unite with her family members back home due to the persecution.

Hongyan Lu said her father was forced to divorce her mother, a Falun Gong practitioner who was imprisoned, as this was the only way they could get a passport for their daughter so she could come to Canada and enjoy the freedom to practice Falun Gong.

“Mr. Prime Minister, please make this trip to China about more than just trade. Urge Communist Party leaders to end the persecution of Falun Gong and the forced harvesting of their organs,” said Lu.

Harper will be going to China on Wednesday Nov. 5.