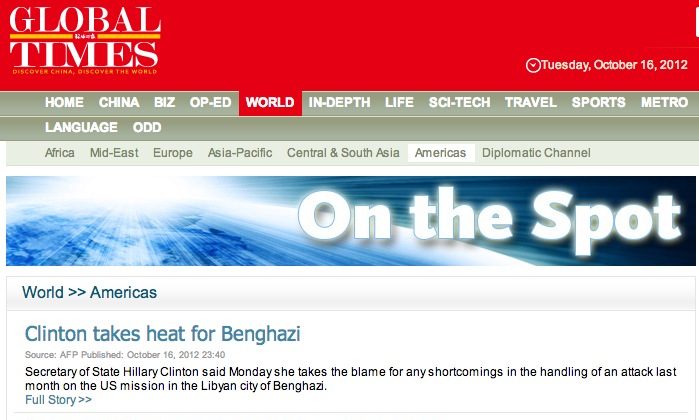 The Global Times website, featuring international coverage with a nationalist bent. The editor, Hu Xijin, will reportedly be sacked because of his allegiance to ousted official Bo Xilai. (Global Times)
China

Editor of Hardline Global Times to be Fired, Sources Say

The editor-in-chief of China’s leftist, hardline Global Times will be forced from his office as the newspaper undergoes an internal reorganization, according to a report from a Hong Kong-based newspaper and information passed to The Epoch Times.

A source said that during a recent meeting among members of the Politburo of the Party Central Committee, Global Times editor Hu Xijin was mentioned by the officials as a person who might be ousted from his position. Hu was grouped with other supporters of ousted politician Bo Xilai, the disgraced official whose trial for corruption and abuse of power is expected to be held soon.

Sources close to the matter also told The Epoch Times that Bo Xilai, when he was still mayor of Chongqing and was tipped to potentially become a high-ranking Politiburo member, promised Hu that he could be in charge of the People’s Daily, when Bo gained power.

The Hong Kong-based World Journal also reported that Hu will have to step down from his position in the newspaper.

The Global Times is a controversial newspaper overseen by the Communist Party-run People’s Daily. It often focuses on international issues, and regularly stirs up nationalist sentiment with inflammatory editorials. The Chinese version is said to have a stronger pro-Communist Party slant—including glorifying former dictator Mao Zedong—than the English paper.

Hu replied via his Weibo account that news of his firing was merely propaganda. “The propagandists can tell [the Communist Party’s] organizational departments to give me a more leisurely job,” he said.

At the center of the Global Times’ editorial slant is Hu. In a recent editorial, for example, Hu accused Chinese liberals of “creating risks for China. You may one day push Chinese society too far and become the bringers of disaster,” reflecting a more hardline Communist Party stance.

But a recent editorial published by Global Times on the ongoing dispute between Japan and China over who owns the Senkaku Islands may have drawn the ire of top Communist Party officials.

“China cannot ensure that the U.S. remains neutral by merely talking,” the editorial reads, adding: “It is not possible for China to persuade the U.S. to maintain true neutrality on the Senkaku Islands dispute … China must take more action in future Sino-Japan conflicts to convince the U.S. that China will do what it says.”

Yang Ning, a political commentator, told The Epoch Times that the editorial put the Global Times at odds with the next Communist Party leader. Yang added that Xi and other top Chinese leaders will likely find a way to remove Hu Xijin, citing the recent case of Beijing Daily Communist Party secretary Mei Ninghua, who was removed from power for allowing a controversial article to be published.

With research by Jack Phillips.