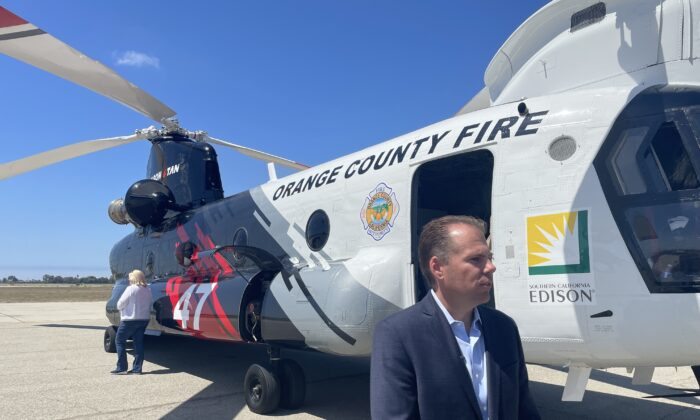 LOS ALAMITOS, Calif.—Helicopters with the Quick Reaction Force are back in Southern California to fight wildfires day and night—after dumping nearly 3 million gallons on more than 50 wildfires last year.

The “helitankers” swoop down to a water source, then send down a retractable snorkel to draw in up to 3,000 gallons of water in just 90 seconds, before flying to the crisis and dumping water and fire retardant on the fire.

“When we say that speed and force is a required cost of doing business in today’s fire environment, we do not mean the cost of [the helicopters], we mean the immeasurable cost of the loss of life and property if these resources are not available,” Orange County Fire Chief Brian Fennessy said in a statement on the July 5 demonstration at Los Alamitos Joint Forces Training Base.

Fennessy came up with the idea of local fire agencies teaming with Edison to mitigate the wildfires plaguing Southern California in recent years, to which the utility company’s President and CEO Steven D. Powell agreed.

“Chief Fennessy played an instrumental role in coming to us with the idea to help them build this program,” Powell told The Epoch Times. He said the helicopters protect both the company’s customers and its infrastructure.

“With another long fire season already upon us, I am grateful they’re here to join the fight,” said Ventura County Fire Chief Dustin Gardner before the demonstration. “Having these helicopters available last summer helped immediately in protecting homes and businesses across the region from wildfire.”

Under the partnership, the utility company paid for leasing the equipment starting on June 24, 2022. Each fire department will provide staff. The operational costs will be covered by the fire department that requested a helicopter be dispatched.

According to flight engineer Zack Greene, the CH-47s are the biggest, fastest, smartest, and most effective water and retardant dropping helitankers in the world.

He said 2021’s successes include a single helitanker dropping 37,000 gallons of water in a narrow canyon at night on the Malibu bush fire—saving homes, structures and lives “in a way no other fire-fighting equipment or personnel ever has.”

Two other critical components of the reaction force are the mobile retardant base and hover-filling tanks. The base will be positioned close to the fire in predetermined locations in each of the three counties, allowing for a faster turnaround time for the helitankers.

Initially, one helicopter will be deployed in each county and available wherever a fire department needs it. Then all four helicopters can converge to provide overwhelming suppression power in Edison’s 50,000 square-mile service area.