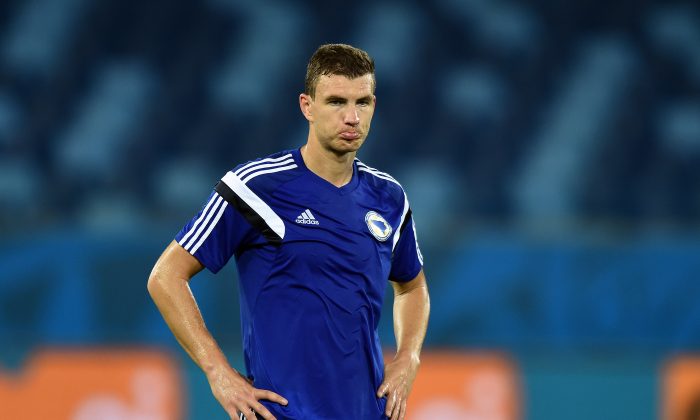 Bosnia-Herzegovina's forward Edin Dzeko takes part in a training session at the Pantanal Arena in Cuiaba on June 20, 2014, on the eve of their 2014 FIFA World Cup Group F football match against Nigeria. (JEWEL SAMAD/AFP/Getty Images)
Soccer

Edin Dzeko should be staying at the Emirates Stadium next season.

The 28-year-old Bosnia-Herzegovina international is interested in and has attracted the interest of Inter Milan, but will not be moving there soon.

“As a kid, my reference point was Serie A,” Dzeko told Corriere della Sera.

“I supported Milan, the best players were there, it was a spectacle.”

“The Premier League was not so popular, it had a lot less charm.”

“Now, everything is different. The perception we have of Italy is negative. There have been too many scandals, the stadiums are old, not up to it.”

“It is such a shame. But my friend Miralem (Pjanic) always speaks well of Roma.”

“Would I go to Italy? City are a great team. We have just won the Premier League, we want to do better in the next Champions League.”

“But I have always thought it would be nice to experience Italy. When, I do not know.”

Here is an AP article on Dzeko.

CUIABA, Brazil (AP) — Just a few weeks ago, Edin Dzeko was being heralded as the best player in the English Premier League by no less an esteemed judge as Jose Mourinho.

On Friday, the Bosnia-Herzegovina striker was being compared with probably the three best players in the world.

“He is equally important to us as Cristiano Ronaldo is for Portugal, as Neymar is to Brazil, as Messi to Argentina,” Bosnia-Herzegovina coach Safet Susic said. “That is how important he is to us.”

The Manchester City star has quite a billing to live up to at the World Cup but he started off slowly, well contained in the team’s 2-1 loss to Argentina in their Group F opener.

With the Bosnia-Herzegovina team’s future in Brazil already on the line, the pressure is on Dzeko to deliver goals against Nigeria in Cuiaba on Saturday to keep the newcomers alive in the tournament and add to his national-record tally for his country of 35.

“We are in the most uncomfortable position of all teams,” Susic said. “If we lose, we can pack our bags and head home.”

For that reason, Susic will stick to the approach that has served him so well in his 4 1/2 years as Bosnia-Herzegovina coach — attack, attack, attack. And that will likely mean a recall to the starting team for Vedad Ibisevic, who scored the team’s goal against Argentina after coming on as substitute.

Between them, Dzeko and Ibisevic netted 18 of the team’s 30 goals in qualifying.

“We are a team that cherishes attacking football and wants to defeat any team at any moment,” Susic said. “We are playing to win. The game will be an open match, plenty of chances — maybe even goals galore.”

Bosnia-Herzegovina stifled Messi and the rest of his high-profile Argentina teammates in the first half at the Maracana on Sunday, showing few nerves in the biggest match in the country’s history.

In the end, Messi broke free to score what proved to be the winning goal — a brilliant individual effort that had two Bosnian defenders colliding with each other in comic fashion — but it was a debut performance at the World Cup by Bosnia-Herzegovina that impressed many pundits.

And Susic’s team isn’t here just for the experience. He expects to advance from the group, even after opening with a loss.

“Since we have top-notch players who play in the big European leagues, we have set ourselves a goal to get out of the group. And rightly so, we expect to,” Susic said. “I think after Argentina, we are the best team in our group.

“We haven’t come here to learn. We have qualified for the first time — who knows when we will repeat this feat.”

Midfielder Sejad Salihovic is back in training with the squad after injury but won’t start against Nigeria. Susic said Salihovic is most likely to be preserved for the “third and possibly fourth match of the tournament.”

Nigeria opened with a 0-0 draw with Iran.