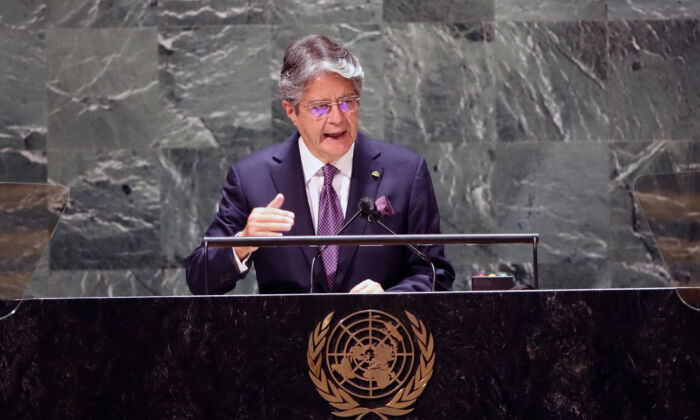 The President of Ecuador, Guillermo Lasso, speaks during the annual gathering for the 76th session of the United Nations General Assembly (UNGA) in New York City on Sept. 21, 2021. (Spencer Platt/Getty Images)
Americas

The Ecuadorian attorney general’s list of corruption investigations just got longer as national assembly legislator Celestino Chumpi has come under fire after a video surfaced on March 31 showing a discussion over the sale of the deputy agriculture minister’s position for $2.5 million.

Fueling the fire surrounding the legislator, President Guillermo Lasso said Chumpi was one of five national assembly members who tried to solicit a bribe from him to vote in favor of a new investment law last month.

In the video, which news outlet La Posta initially released, a man named Ernesto Ripalda claimed to be an adviser to Chumpi and spoke with two other men about the sale of the public office.

Ripalda specifically discussed the price of the position, the conditions, and form of payment, and inquired about any interest in the transaction.

“Celestino Chumpi, my boss, was here in the morning. I work for him. I’m an adviser to him. … I have lunch and I have to go to the Assembly,” Ripalda said in the recording.

The men also agreed the price of the deputy ministry should be $2.3 million, to which an additional $200,000 dollars profit would be added as their fee, bringing the total sale price for the position up to $2.5 million.

There was also a discussion of an “economist” who would help coordinate the negotiation on behalf of the government.

Public and official outrage over the leaked video was swift.

Agriculture minister Pedro Álava said he hopes “the full weight of the law will be applied against those who have taken the name of this portfolio with the clear political intention of attacking the national government and this ministry.”

Chumpi addressed the accusations in a March 31 press conference. “I am totally outraged and morally devastated because they have taken away my dignity, my good name, my good reputation,” he said.

The legislator backed himself into a verbal corner with journalists after saying he didn’t know Ripalda but admitted he hadn’t watched the video.

Further, he announced that his attorney would present a request for precautionary measures before the Inter-American Commission on Human Rights, citing grounds of political persecution.

Since Chumpi’s initial comments, new evidence suggests that the accused legislator and Ripalda do know each other.

President of the Guayaquil Civic Board, Miguel Palacios, said Chumpi and Ripalda were part of an official delegation he met with back in March 2010 that aimed to gain support for an opposition front against the administration of former President Rafael Correa.

According to Palacios, Ripalda was a “legal adviser” in the meeting.

Five key members abstained from voting on Lasso’s new investment law after asking the head of state for “economic benefits” in exchange for favorable votes.

Lasso made his formal accusations in a letter addressed to the attorney general’s office.

After the investment law failed to garner the required 70 votes for approval, the president announced on social media that the measure failed because he refused to be blackmailed by the Pachakutik assembly members.

Before coming forward with names, Lasso said on March 24 that some of the members who tried to extort a bribe asked for positions, hospitals, ministries, electric companies, and cash.

“We cannot allow … corruption. … In this country, you have to tell the truth,” Lasso said.

Responding to the corruption allegations and demands from Lasso’s office to investigate the new claims against Chumpi, the attorney general’s office published a statement on March 31 saying it has been investigating “alleged acts of corruption by different public institutions and political actors” since September 2021.