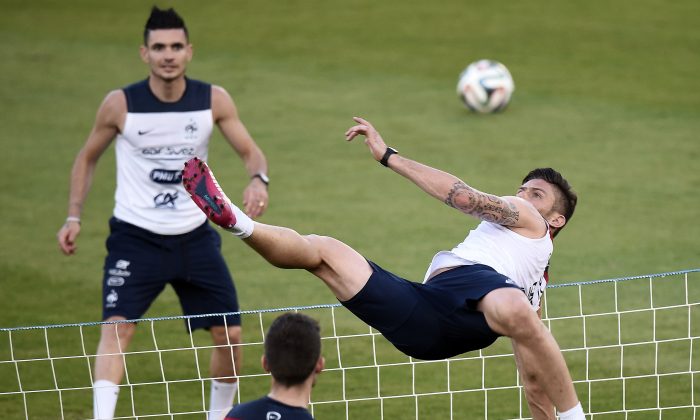 France's forward Olivier Giroud (R) jumps to kick the ball during a training session at the stadium Santa Cruz in Ribeirao Preto on June 22, 2014, during the 2014 FIFA World Cup in Brazil. (FRANCK FIFE/AFP/Getty Images)
Soccer

Ecuador and France will face off in a World Cup 2014 Group E match on Wednesday, June 25.

The game will kick-off at 4:00 p.m. EDT at Estadio do Maracanã, Rio de Janeiro.

RIBEIRAO PRETO, Brazil (AP) — If France beats Ecuador in Wednesday’s Group E match, it will be the first time it has won all three group games in a major competition since 1998 — the year it went on to win the World Cup.

This kind of talk worries France coach Didier Deschamps, who captained the side in ’98 and who has been trying to play down the growing hype after his team’s 5-2 thumping of Switzerland last Friday.

French Football Federation president Noel Le Graet has joined Deschamps in trying to quell rising expectations back home, saying Sunday that “things are going quicker than I’d imagined. I think a bit too quickly and there’s a little bit of excess.”

Anything but a win against Ecuador will be seen as disappointing, however, considering how France has started the tournament with such attacking intent — scoring eight goals in two games after opening with a 3-0 win over Honduras.

But Deschamps is wary of dismissing Ecuador, given how the World Cup is becoming such a wide-open tournament.

“Who would think that Costa Rica would have six points, in the group they’re in? No one,” he said, pointing to Costa Rica’s surprise wins against 2010 World Cup semifinalist Uruguay and 2006 winner Italy. “I saw the match between Netherlands and the Australia and there really wasn’t much in it. Other teams have been doing well here, not just us.”

A draw is enough to guarantee top spot for France, and would also send Ecuador through to the next round if Switzerland fails to beat Honduras in the other match.

Ecuador and Switzerland have three points each, but Ecuador has a better goal difference — although it is likely to face a far more severe test against a French attack featuring Karim Benzema and Olivier Giroud, who both scored and created goals against the Swiss.

“The way to read it is that we’re going to have a lot of work,” Ecuador center half Frickson Erazo said.

France has scored 39 goals in 11 games, including 16 in the past three having thumped Jamaica 8-0 before boarding the plane to Brazil.

“They scored eight goals in one match,” midfielder Christian Noboa said. “Scoring a goal in a World Cup is difficult, scoring eight gives you a guide to what France are all about.”

However, France’s defense looked shaky late on against the Swiss after center half Mamadou Sakho limped off and Les Bleus conceded two goals in the last 10 minutes.

“We lost our concentration and you pay the price at this level,” right back Mathieu Debuchy said. “Of course it’s annoying to concede goals, but you work on it and we’ll try and fix it quickly.”

The powerful, direct running of Enner Valencia could cause France problems. The 24-year-old forward has scored three goals so far — like Benzema — and has five in four games after netting in pre-tournament friendly games against Mexico and England.

Deschamps is sweating on the fitness of Sakho and Raphael Varane, who both sat out Sunday’s team training session. Sakho has a thigh problem and Varane missed training because of gastroenteritis. Laurent Koscielny and Eliaquim Mangala are the back-up center halves.

Deschamps has intensified competition for places in his side, surprisingly dropping Giroud for the opening game, with Antoine Griezmann replacing him, and then restoring a fired-up Giroud to the lineup against Switzerland. He also left out coveted midfielder Paul Pogba against the Swiss, with Moussa Sissoko taking his place and scoring his first international goal.

“The coach often says that everyone has a part to play,” Sissoko said. “There were two changes (against Switzerland) and there may be more in the next match.”

Although Deschamps may rotate his team, Debuchy is in no mood for a rest.

“We’re at the World Cup. I want to play in every game,” he said. “The coach knows me well enough to know that.”