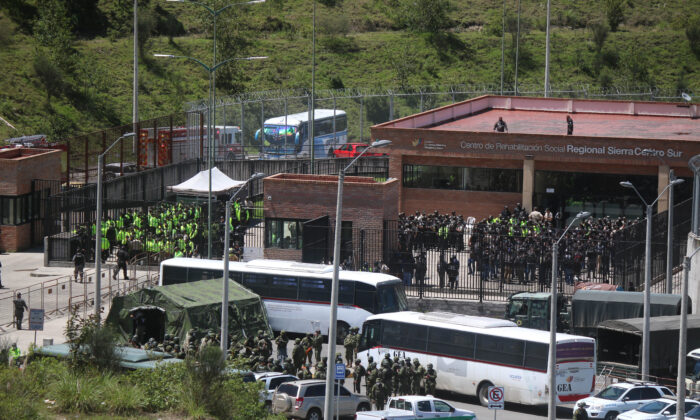 Police and military guard the CRS Turi prison a day after a riot in Cuenca, Ecuador, on April 4, 2022. (Fernando Machado/AFP via Getty Images)
International

QUITO—Ecuador’s government has retaken control of a prison in the city of Cuenca where 20 people were killed in a violent confrontation over the weekend, it said on Monday.

The violence at El Turi prison took place in the maximum-security cell block and was the result of disputes between members of the same gang for control of the wing, the government said.

It was the latest incident of violence in Ecuadorean prisons, which the government usually attributes to gang confrontations over drug trafficking. Last year prison violence killed 316 people.

The Inter-American Commission on Human Rights says the system is blighted by state abandonment and the absence of a comprehensive policy, as well as poor conditions for inmates. The country’s prisons are about 15 percent overcrowded and house some 35,000 people.

“At this time the El Turi center is under control, but it’s relative because the institution remains definitively weak,” Interior Minister Patricio Carrillo told local radio.

“I don’t think this is just about bad relations and interior rancor, there are huge economic interests.”

Six people were found “suspended” in cells and one showed signs of apparent poisoning, the minister said.

Five bodies were mutilated, Carrillo added, and the remains will be given back to families in the coming hours.

Some 1,000 members of the security forces were deployed to retake control of the prison, he said, and prisoners will now be moved to different blocks within the facility to try to mitigate further disputes between the gang members.