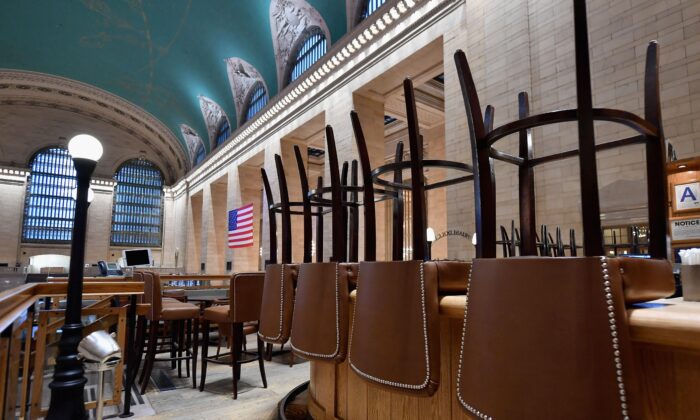 A view of an empty restaurant is seen at Grand Central Station on in New York City on March 25, 2020. (Angela Weiss/AFP via Getty Images)
US News

The American economy has lost more than 700,000 jobs in the first weeks of government efforts to slow the spread of the CCP virus. The hospitality industry was hit the hardest, but virtually no sector escaped the contraction, data released April 3 by the Bureau of Labor Statistics (BLS) shows.

One after another, governors across the country issued shutdown orders, closing bars, theaters, and all “non-essential” businesses.

The BLS data doesn’t capture the full brunt of the shutdown, as it’s based on a survey conducted between March 8 and March 14, before many of the mitigation measures were adopted.

Claims for unemployment benefits soared to a record high of more than 6.6 million for the week ending March 28.

Oxford Economics is predicting payrolls could plunge by at least 20 million jobs in April, which would blow away the record 800,000 tumble in March 2009.

The unemployment rate increased to 4.4 percent in March, up from 3.5 percent the month before. But this number is inaccurate, the BLS cautioned, due to misclassification of some workers laid off during the shutdown. The real rate would be close to 5.4 percent, the bureau said.

A majority of the job losses, nearly 420,000, were in the restaurant sector, which was largely only allowed to provide takeout. Some restaurants have adapted by switching to grocery sales, and with encouraging results. Some states have lifted regulations to allow restaurants to sell as retail the items they buy wholesale and some have allowed restaurants to sell alcohol with takeout orders.

The counter-virus measures have brought to an end a historic 113 straight months of employment growth.

The only areas that saw some job growth were some merchandise stores (nearly 9,000), warehousing (over 8,000), outpatient care centers (over 5,000), and a few others. The federal government—other than the U.S. Postal Service, which lost jobs—added nearly 20,000 jobs.

President Donald Trump has tried to maintain some level of optimism in the markets, saying the economy will come “roaring back” once the virus restrictions are lifted. The administration has recommended people to follow “social distancing” rules until April 31. It has also worked with Congress to pass a $2.3 trillion relief package that will provide cash to individual Americans, loans to small businesses, and bailouts for affected industries, such as the airline industry.

Trump said he wants another package that would provide $2 trillion for infrastructure.

Correction: A previous version of the headline for this article incorrectly characterized the period when the United States lost 700,000 jobs. It happened from mid-February to mid-March.