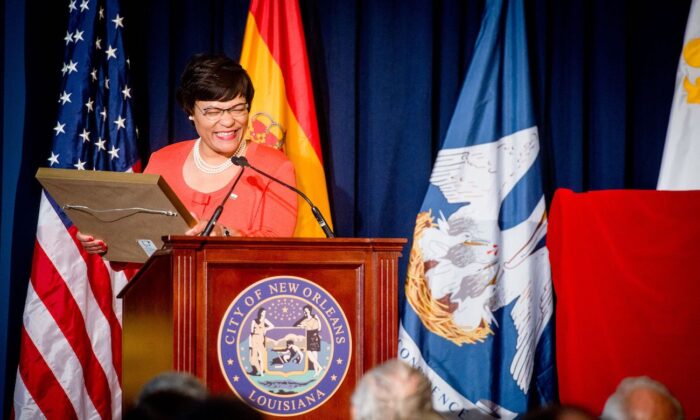 New Orleans Mayor LaToya Cantrell has defended using taxpayers’ money to purchase first-class seats on international flights and insisted she will not pay the money back after previously stating that it is unsafe to fly economy as a black woman.

Cantrell, a Democrat, made the comments at a press conference on Sept. 8 where she insisted that she would not be repaying the nearly $30,000 in taxpayers’ money that she spent on first-class flights to France and Switzerland.

According to The Times-Picayune/The New Orleans Advocate, Cantrell has charged the city of New Orleans $29,000 to travel first- or business-class instead of via economy since January 2021, with her flights costing more than $38,200 overall.

Last month, the mayor defended her actions by stating that the upgraded travel was due to fears over her safety.

“My travel accommodations are a matter of safety, not of luxury. As all women know, our health and safety are often disregarded and we are left to navigate alone,” the mayor told the Times-Picayune/The New Orleans Advocate in August.

“As the mother of a young child whom I live for, I am going to protect myself by any reasonable means in order to ensure I am there to see her grow into the strong woman I am raising her to be. Anyone who wants to question how I protect myself just doesn’t understand the world black women walk in.”

However, New Orleans’ travel policy states that municipal workers must “purchase the lowest airfare available,” while employees who “choose an upgrade from coach, economy, or business-class flights are solely responsible for the difference in cost.”

It also states that “any reconciliation of travel expenses that results in overpayment by the city requires that the employee reimburse the city within 20 business days.”

Cantrell, who faced criticism earlier this year after she was photographed at an indoor party without wearing a face covering in violation of her own COVID-19 mandate for the city, is currently being probed by the chief administrative officer over the luxury American Airlines flight for herself.

The city’s legal office is looking to determine whether or not the mayor must reimburse the thousands of dollars in taxpayer funds.

Chief Administrative Officer Gilbert Montaño told Fox 8: “I think that’s still under review, with the law kind of determining the variations between the CAO policy, the elected official policy, and the different variations. There’s no ultimate conclusion at this current moment. Right now it’s in law, and we are evaluating it, and I think there would be a determination sooner rather than later.”

Cantrell’s staff also told the publication that they are working to determine if New Orleans’ travel policy applies to the mayor, citing the fact that she is an elected official and not a city employee that has been hired.

According to local reports, the mayor spent nearly $2,300 to fly first-class to a Conference of Mayors’ meeting in Washington, D.C., in January, followed by over $2,800 to fly first-class to Miami, Fla., for a U.S. Conference of Mayors gathering in March, while her staff members flew economy. She has since racked up nearly $30,000 in airfare purchases.

A recall petition was filed in August against Cantrell by two individuals: community activist Belden Batiste and Eileen Carter, who is a former City Hall staffer, over the mayor’s alleged “failure to put New Orleans first and execute the responsibilities of the position.”