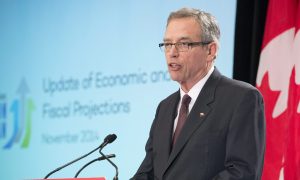 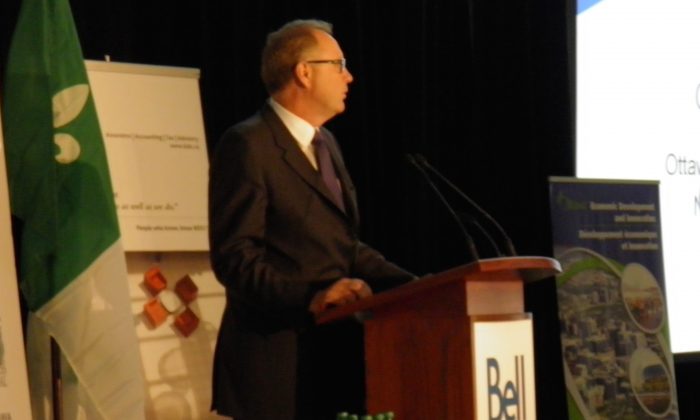 OTTAWA—The economic outlook is bright in the nation’s capital. Local business leaders gathered at the Ottawa Convention Centre on Wednesday, Nov. 12, for an update on the economy and to discuss initiatives relating to innovation and economic growth.

Doug Porter, chief economist at BMO Financial Group, provided a macroeconomic update. His views on the future trajectory of interest rates and the Canadian dollar are of a modest drift higher in rates in 2015 and a weaker loonie.

Porter is still bullish on U.S. equity markets despite their hitting record high after record high. Canadian stocks have also done well, with the TSX up 8 percent before factoring in dividends.

A key aspect of any local economy is the housing market. While the macro picture looks promising with the recovery continuing and the normalization of interest rates, the housing situation for most of the country isn’t promising.

Price increases have been most notable in Vancouver, Calgary, and Toronto, while the rest of the country, including Ottawa, generally lags.

“Those three cities are somewhat skewing the national numbers,” Porter said, adding that it’s a “much more modest picture” in other cities.

While home prices have been on a long upward trajectory, Porter gave his bleak forecast for the upcoming decade.

“Our best guess is that over the next 10 years, we’re not going to be very likely to see any net increase in national housing prices,” he said. He compared what his projection is to the decade of the 1990s, which saw home prices remain flat as interest rates normalized quite quickly.

Mayor of Ottawa Jim Watson was particularly keen to discuss the new innovation centre being built, which he compared to the Waterloo’s Communitech. It will open its doors in early 2016 and will help hundreds of startups and ultimately economic growth in the region and beyond.

Watson pointed out that Ottawa has the greatest number of Ph.Ds per capita in Canada and is second only to Boston in North America in this regard.

As is the case in almost any region, the job growth is going to come from small and medium enterprises, which would benefit from an initiative such as the new innovation centre.

“We are on the right track economically,” said Watson, who was recently re-elected with an overwhelming majority.

George Cope, president and CEO of BCE and Bell Canada, discussed how his company has turned itself around since 2008 and its commitment to the Ottawa region.

Bell has a history dating back to 1888 and is the largest private sector employer in Ottawa.

Service was a key area of improvement and one of Bell’s strategies to improve its level of service was to bring back call centres to Canada—and not just to the big cities.

Among the initiatives Bell has been instrumental in achieving is helping Canada have the second fastest mobile download speeds in the world (after Denmark). Bell’s core business is investing and developing broadband services and networks.