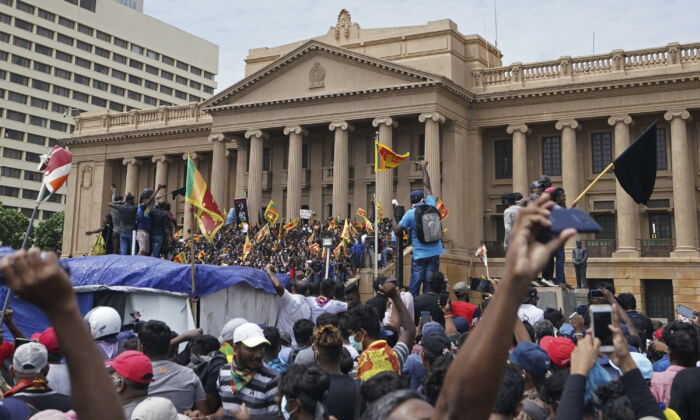 Civilian outrage in Sri Lanka has been simmering since 2021 over the effects of commodity shortages, inflation, and economic policy failures that erupted into widespread protests beginning in March.

Thousands of demonstrators in the Sri Lankan capital of Colombo stormed the president’s official residence and burned the prime minister’s home on July 9, after which House Speaker Mahinda Yapa Abeywardena released a video statement saying President Gotabaya Rajapaksa would step down from office on July 13.

Protest leaders say they’ll continue to occupy the official residences of the president and prime minister until they leave office.

The civilian coup was preceded by Rajapaksa’s 26-member cabinet resigning from office on April 3.

While political heads worldwide have spun at the drastic turn of events, some experts hinted at the possibility of the outcome months ago.

The island nation of nearly 22 million people, located off India’s southern coast, has been floundering in a sea of economic missteps made worse by the COVID-19 pandemic. The country is also suffering commodity inflation and critical shortages of items such as food and fuel that are exacerbated by Russia’s conflict in Ukraine.

Another component was a ban on synthetic fertilizer enacted in April 2021 that backfired on Rajapaksa’s administration. As a result, Sri Lanka has been enduring its darkest economic days since gaining independence from the UK in 1948.

“The COVID-19 pandemic served to highlight structural challenges predating the pandemic,” the Institute of Policy Studies of Sri Lanka stated in an annual report.

Fiscal weaknesses, an “uninspired” export portfolio, and the rise of informal labor markets top the list of weak links in the nation’s economic chain.

The pandemic worsened existing food insecurities, leaving the country in a delicate position before being hit with inflation.

The institute noted that COVID-19 was a wake-up call and that it has “profoundly altered perceptions about the appropriate settings for economic policy.”

Prices on consumer commodities skyrocketed by 54.6 percent since last year in June. Transportation costs soared by 128 percent and food items by 80 percent from May amid dire shortages of staple crops and oil imports.

Debt repayment issues aren’t new to the country, and failure to provide any consistent, long-term solutions resulted in a downgrading of the country’s credit rating in 2021. A scarcity of foreign currency resulting from industry shutdowns during the pandemic followed by the printing of more money complicated existing issues.

Rajapaksa’s administration has historically responded by procuring outside funds from international sovereign bonds and the notorious developing country “debt trap” loans from China. Sri Lanka currently has $51 billion in outstanding foreign debt, $6.5 billion of which is owed to China.

Then the country was hit with supply chain disruptions, shortages, and severe inflation.

For some economists, a hindsight investment in key industries could’ve made a difference.

“There’s a need [in developing countries] to invest in sustainable activities with medium- to long-term impact, like agriculture and tourism,” economist Eduardo Hoffmann told The Epoch Times.

Hoffmann’s expertise is in developing country economics; he’s a former translator for the World Bank.

He says that underdeveloped nations need a vast quantity of jobs for unskilled workers since inequities in education access are prevalent in the majority of these countries.

Farming and tourism are ideal candidates for unskilled labor demands.

Tourism in Sri Lanka serves a dual purpose. It not only generated revenue, but also brought in a significant amount of foreign currency before the pandemic shutdowns. It represented more than 5 percent of the country’s gross domestic product (GDP) before COVID-19.

On the other end, agriculture makes up more than 7 percent of the nation’s GDP. The farming sector employs 30 percent of Sri Lanka’s workforce.

In April 2021, Rajapaksa announced a total ban on synthetic fertilizers in an attempt to push organic farming initiatives.

The government approved 99,000 metric tons of organic fertilizer from China’s Qingdao Seawin Biotech Group on Aug. 5, with a hefty price tag of $63.3 million.

This spiraled quickly into Sri Lankan farmers being stranded without the ability to plant their fields, resulting in massive crop shortages.

Rajapaksa’s administration partially lifted the ban on synthetic fertilizers in November 2021, but it proved to be too little too late.

Concurrently, a lack of means to pay for imports left officials scrambling to have fuel imported into the country. The dwindling supply became critical in January, pushing inflated prices even higher and leaving the government with little choice but to ration what was left.

Hoffmann maintains that the agriculture and energy sectors are critical components when it comes to a country’s economic stability.

“Make no mistake, the food chain and energy chain are directly related,” he said.

High-level talks with the International Monetary Fund in June—a last-ditch resort for the outgoing administration—also failed to yield any concrete results.

For the moment, the nation holds its breath as the president and prime minister prepare to leave office and a transfer of leadership is outlined.

“The decision to step down on 13 July was taken to ensure a peaceful handover of power,” Abeywardena said in the July 9 statement. “I, therefore, request the public to respect the law and maintain peace.”