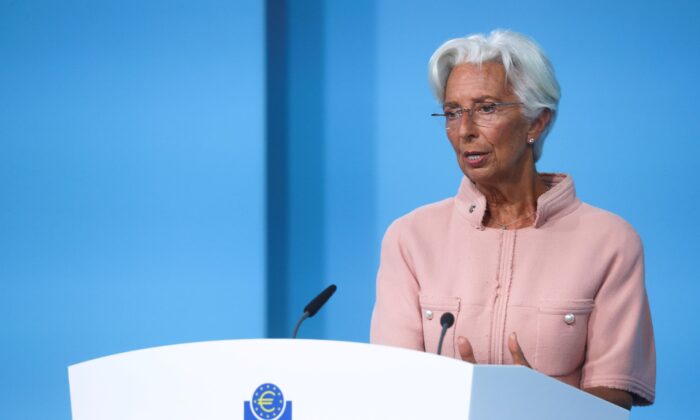 President of the European Central Bank (ECB) Christine Lagarde speaks as she takes part in a news conference on the outcome of the Governing Council meeting, in Frankfurt, Germany on Sept. 9, 2021. (Kai Pfaffenbach/Reuters)
Business & Economy

ECB’s Lagarde Says Many Causes of Inflation Spike Are Temporary

FRANKFURT—Many of the drivers of a recent spike in euro zone inflation are temporary and due to fade in the next year, European Central Bank President Christine Lagarde said.

Euro zone prices have been rebounding faster than expected as the economy reopened after pandemic-induced lockdowns, and several ECB policymakers think inflation will be close to, or even above, the ECB’s target of 2 percent next year.

In an interview aired on CNBC on Friday, Lagarde blamed much of the rise on supply disruptions and said inflation should stabilise next year. She was later echoed by Italian ECB policymaker Ignazio Visco.

“We think that there will be a return to much more stability in the year to come because many of the causes of higher prices are temporary,” Lagarde said.

“When you look at what’s causing it, a lot of it has to do with energy prices.”

She added “things will fall into place” when new sources of supply are found but cautioned higher energy prices might persist as they related to a transition away from fossil fuels.

Speaking to Italian broadcaster Rai, Bank of Italy governor Ignazio Visco said he saw “no underlying driver” for inflation to persist beyond this temporary spike and that wages were not being increased.

Lagarde expected “movement” on the inflation front once the labour market tightened but added there was still “a lot of ground to cover” with at least one million more unemployed than before the COVID-19 pandemic.

The ECB president also sought to differentiate between the ECB, which began scaling back its emergency bond purchases this month though it plans to keep printing money for a while, and the Federal Reserve, which said this week it expects to start tapering its bond-buying scheme soon.

“There is an element of tapering in the way they (the Fed) have structured their support package to the economy, whereas we are not in that situation,” Lagarde said. “We are in the process of calibrating, and we have begun calibrating.”

Asked about the turmoil that has hit China’s property firm Evergrande, Lagarde said: “in the euro area, in particular, direct exposure would be limited.”