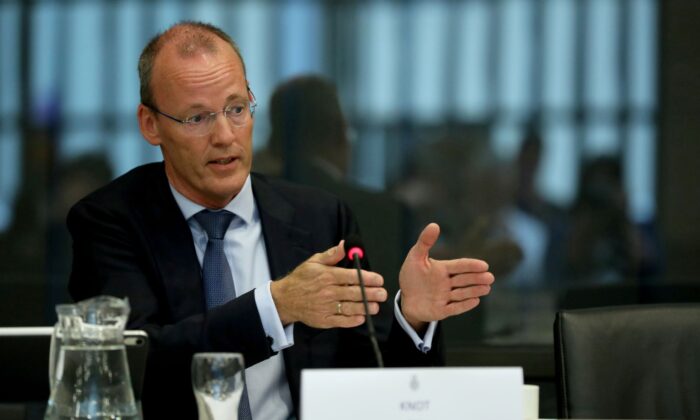 ECB board member Klaas Knot appears at a Dutch parliamentary hearing in The Hague, Netherlands, on Sept. 23, 2019. (Eva Plevier/Reuters)
Markets

AMSTERDAM—Klaas Knot, the Dutch central bank president and a member of the European Central Bank’s Governing Council, said on Sunday he expects the ECB to raise interest rates in the fourth quarter of this year.

In an interview on Dutch television program Buitenhof, Knot, known as one of the more hawkish members of the ECB’s board, said he supported winding down the euro zone central bank’s asset purchasing program as quickly as possible.

“Personally I expect our first rate increase to take place around the fourth quarter of this year…. Normally we would raise rates by a quarter percentage point, I have no reason to expect we would take a different step.” He added that he thought a second hike would likely follow in early 2023.

Knot’s remarks come after ECB President Christine Lagarde on Thursday opened the door to an interest rate increase in 2022 but said it was “unlikely”.

The bank must first end its asset purchasing programs, currently set to be wound down in steps to 20 billion euros ($22.89 billion) per month by the fourth quarter. However, since Thursday bond markets have begun pricing in around 40 basis points of rate hikes by December.

“The first two rate increases will follow each other quite quickly, as they will take us out of negative territory,” Knot said.

“After that, if we don’t see a wage-price spiral and inflation expectations remain anchored around our 2 percent target there is not much reason for us to increase rates significantly and quickly.”

Knot said that inflation in the euro zone, at 5.1 percent in January, was too high, and will probably last into 2023 before receding—assuming there is no further unexpected increase in energy prices.