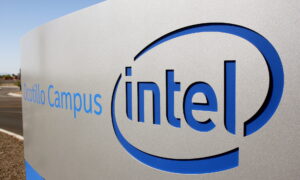 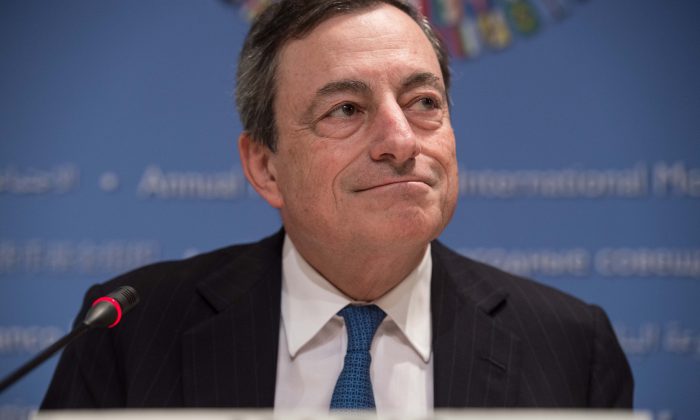 European Central Bank (ECB) President Mario Draghi at the annual IMF/World Bank meetings in Washington on Oct. 11. During the summer, the ECB announced that it would impose an interest rate charge on euro deposits. (Nicholas Kamma/AFP/Getty Images)
Business & Economy

Monetary policies from the European Central Bank (ECB) are forcing some global banks to charge for euro deposits.

During the summer, the ECB announced that it would impose an interest rate charge on euro deposits, meaning banks would need to pay the ECB to park their cash. In normal economic times, an interest would be paid on top of the deposits.

The policy was instituted to encourage banks to lend, and people to invest. The reluctance to spend money has stagnated European economic growth.

After the ECB further dropped rates last month, some large banks have begun to pass the costs onto their customers, particularly the large ones with multimillion euro deposits.

It is a momentous decision that was rarely seen in the past (banks normally would eat such costs), and signals that global banks expect negative interest rates on euros to stay.

This means that instead of being paying an interest for depositing money, companies are being charged an interest to give banks their euros.

Bank of New York Mellon Corp., the world’s biggest custody bank, began charging 0.2 percent on euro deposits. In an earnings call last week with analysts, Bank of New York said that around 15 percent of its deposits are euro-denominated, and it is passing on the costs to customers.

People familiar with the matter told the Financial Times that Goldman Sachs Group Inc. and Credit Suisse Group AG are also charging customers for euro deposits, and HSBC Holdings PLC will soon begin to charge customers with more than 10 million euros in deposits.

Money managers expressed that, unlike in the past, so many banks are instituting similar policies, making it harder to move assets to avoid such fees. The decision will have the largest effect on institutional mutual funds, money-market funds, hedge funds, and corporations with extensive operations in Europe.

The euro move has also affected short-term government bond yields, which also dipped into negative territory among seven major euro countries. This means that investors purchasing such short-term securities will lose money if they are held to maturity.

Unlike during the financial crisis, there is currently an alarming disparity in the monetary policies of the U.S. Federal Reserve and the ECB. The Fed has embarked on measures to “taper” asset purchases, while the ECB is pushing additional stimulus.

This means that the ECB’s decision will further depress the value of the euro, especially against the dollar.

Central banks are also rethinking the makeup of their foreign cash reserves. According to figures from the International Monetary Fund in early October, global central banks cut their foreign exchange reserves in euros in the latest quarter, while holdings in every other major currency increased.