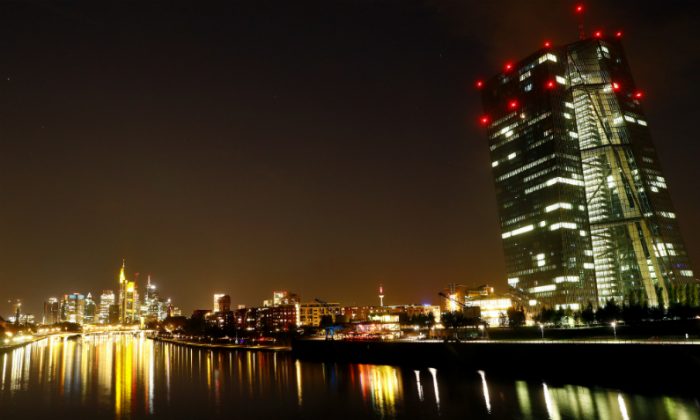 The skyline with its financial district (L) and the headquarter of the European Central Bank (ECB,R) are photographed on early evening in Frankfurt, Germany,on Sept. 18, 2018. (Kai Pfaffenbach/Reuters)
Europe

BENGALURU—Eurozone growth will bounce back to a faster yet still modest pace this quarter, allowing the European Central Bank to stop buying bonds next month as planned, despite economic and political fears, a Reuters poll found.

While the eurozone economy unexpectedly grew at its weakest pace in more than four years—just 0.2 percent last quarter—the Nov 8-13 poll of nearly 90 economists predicted growth would pick up again to 0.4 percent this quarter.

That comes despite a trade war between the U.S. and China that shows no signs of letting up, as well as political turmoil in Italy over its budget and still-inconclusive talks on Britain’s pending exit from the European Union.

The U.S.-China trade war and a change in emissions regulation in the auto industry hurt German exports, making Europe’s biggest economy shrink for the first time since 2015 last quarter, according to data released on Nov. 14.

“Right now, it’s more the case of a loss of momentum than the start of a downturn. And why is that? Because we have a couple of one-off factors—really high oil prices denting consumer spending and the political situation in Italy,” said Carsten Brzeski, chief economist at ING, describing why the third quarter was so disappointing.

The latest data clearly suggest growth momentum in the currency bloc is well past its peak. That in turn is fuelling speculation some ECB policymakers may be feeling uncomfortable about ending the asset-purchase program, particularly given inflation has not taken off.

For a second month in a row, all economists in Reuters polls unanimously said the central bank would not extend the 2.6 trillion-euro ($2.9 trillion) purchase program into next year.

The intention to end bond purchases is not only practical but also technical. The central bank already owns a huge chunk of eurozone government bonds and under current rules of ownership, the existing supply is drying up.

Average annual inflation is expected to be below the ECB’s 2 percent target ceiling until 2021 at the earliest, suggesting weak price pressures will not shift the central bank at this stage.

The ECB was forecast to raise its deposit rate to -0.25 percent in the third quarter of next year from -0.4 percent currently and the refinancing rate to 0.10 percent in the last quarter of 2019 from zero now. Those predictions were unchanged from last month.

Asked about the risk the ECB would not raise its deposit rate next year, over 80 percent of respondents said it was low. But only just over half said the same applied to its refinancing rate.

“The data haven’t been weak enough for them to consider not hiking next year. But again, if we have further weakness in the coming months it will be very difficult for them,” said Elwin de Groot, head of macro strategy at Rabobank.

“Already the story is getting more difficult, as they are winding down the net asset purchases, because of technical reasons in a way, and not because they have achieved their goals.”

While private surveys have pointed to easing business activity and suggest the slowdown has further to run, the latest Reuters poll predicted the eurozone economy would pick up and grow a modest but steady 0.4 percent pace from now until summer 2020.

Even the two economists who correctly predicted last quarter’s slowdown in a Reuters poll, as well as the most accurate forecaster of 2017, have penciled in a growth pick-up this quarter and a steady outlook thereafter.

“The upswing will continue but of course at a slower pace… and that means this is in line with its potential output growth,” said Christoph Weil, senior economist at Commerzbank.

“We expect a slight rebound to 0.4 percent, but, of course underlying trends have also come down.”