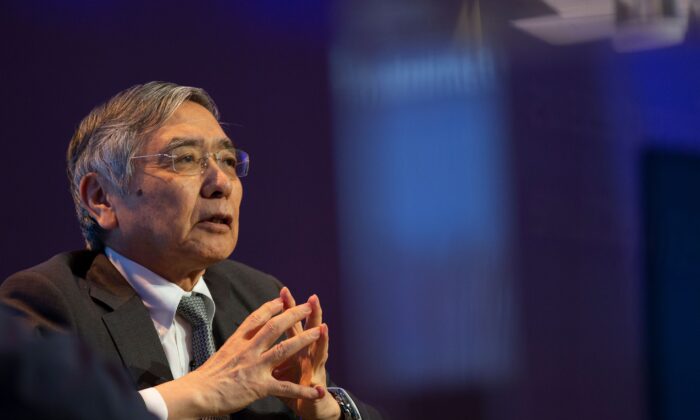 The head of Japan’s central bank told local outlet Nikkei on Sept. 8 that accommodative monetary policy would continue even after the pandemic subsides in a bid to hit a 2 percent inflation target, a goal that has been undershot for years.

Haruhiko Kuroda, Governor of the Bank of Japan, said that the central bank’s yield curve control policy would remain in place even if fiscal policy becomes more expansionary, according to Nikkei.

Under the policy, the Bank of Japan makes massive bond purchases to keep the benchmark 10-year bond yield at around zero and short-term interest rates below that level at -0.1 percent.

“Even if fiscal policy becomes more aggressive, interest rates will remain low and help enhance the effect of fiscal policy,” Kuroda said, according to the outlet.

Asked about the impact of additional fiscal spending on markets, Kuroda said he didn’t think it would be negative, adding, “but we will monitor market developments carefully.”

Kuroda warned of risks to Japan’s economy, saying the impact of a resurgence in COVID-19 infections was “highly uncertain.”

“We will continue with our current monetary easing to support corporate funding, and stand ready to take additional easing measures without hesitation as needed,” he said.

While the Bank of Japan’s objective has long been for a 2-percent rate of inflation, the last time it met that target was in March 2015, when the all items Consumer Price Index (CPI) hit 2.25 percent in annualized terms. Since then, the highest the measure reached was around 1.5 percent in Feb. 2018, on occasion falling into negative territory, and reaching 0.197 percent in June 2021.

Bank of Japan policymakers expect the inflation rate to rise to 1 percent in 2023, far short of the 2 percent target, according to Nikkei.

A former deputy governor of Japan’s central bank, Hirohide Yamaguchi, recently called for the inflation target to be revised to be more achievable in order for policymakers not to get stuck doing endless stimulus.

“It’s about time the BOJ set a realistic price goal rather than rigidly targeting 2 percent,” Yamaguchi told Bloomberg on Sept. 7.

“The BOJ shouldn’t continue with ultra easing just for the sake of the price target no matter how long it takes,” added Yamaguchi, who left the bank in 2013, shortly before Kuroda took the helm.

“We can’t see the prospect of inflation reaching it, even after more than eight years,” he added, referring to the 2-percent objective that the Bank of Japan has maintained as its target under Kuroda.

Yamaguchi’s remarks come as central banks around the world, including the Federal Reserve, are talking about tapering stimulus as economic activity rebounds and labor markets show signs of improvement.