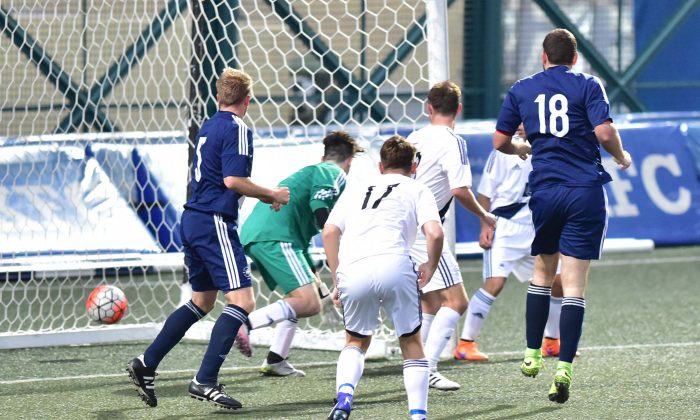 HONG KONG—This week’s BOC Life Hong Kong Premier League round kicked off on Friday (March 17) night, with the game between HKFC and BC Glory Sky at HKFC’s Sports Road Ground, with the bottom two teams fighting not to occupy bottom position. HKFC struck the first blow when Frederick Schipper headed a cross into the net via the far post in the 21st minute, a lead that they held until the interval. However, BC Glory Sky started the second half with renewed vigour and equalised in the 49th minute when Everton Camargo curled in a free kick. BC Glory Sky took the lead in the 60th minute when Camargo scored his second with a left foot shot from the right hand side of the box past goalkeeper Issey Maholo,, and extended their lead in the 67th minute when Igor Miovicvolleyed home a corner kick. BC Glory Sky wrapped up the game with Everton Camargo’s hat trick goal in time added on for a 4-1 victory to swap positions in the table with HKFC.

Saturday’s (March 18) first game saw Kwoon Chung Southern take on Wo Foo Tai Po at Aberdeen Sports Ground. After the game reached half time at nil all, Wo Foo Tai Po had Fung Wing-wah sent off after receiving his second yellow card in the 58th minute, and Kwoon Chung Southern took the lead in the 61st minute when Roberto Fronza fired home, and doubled their lead in the 72nd minute when James Ha scored from Wellingsson Da DSouza’s cross for a 2-0 win.

Sunday’s (March 19) early game involved Lee Man Rangers and Kitchee at Mongkok Stadiun, Kitchee winning 5-1 after an imposing first 30 minutes that settled the game. Kitchee scored after 4 minutes when Krisztin Vadocz headed in a corner, but Lee Man Rangers equalised in the 18th minute when Jorge Tarres scored a fine solo goal. However, Kitchee quickly re-took the lead from Fernando Pedreira in the 24th minute, while Alessandro Leonardo added a brace with goals in the 27th and 30th minutes to effectively seal the result. Kitchee added a fifth from Leonardo Pedreira in the 75th minute for a 5-1 victory.

Sun Hei lead the table with 54 points from 20 games with Wong Tai Sin second with 53 points from the same matches.

Lucky Mile lead the second division table with 35 points from 17 matches with Central & Western second on 34 points from the same games, Hoi King and Sparta Rotterdam Mutual are joint third with 32 points from 15 and 16 games respectively, and Tuen Mun with 28 points from 16 matches..

Wing Go Fu Moon lead the table with 44 points from 17 matches, with Happy Valley  second with 43 points from the same games.

This week saw the Cup semi-finals, with Wanderers and Colts facing off at Sports Road, and KCC Knights playing Swiss XI.

Colts won 2-nil in their local derby semi final with Wanderers, whilst Swiss XI were 3-1 victors over KCC Knights.

In the Chairman’s Cup semi-finals, CSOB won 4-3 in a penalty shoot out with University with the game tied at 2-all, whilst HKSS were 4-1 winners against Skyline.