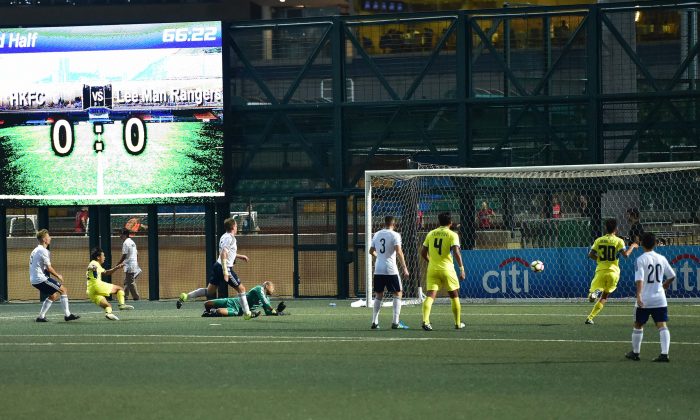 HONG KONG—The BOC Life Premier League round stretched over the week, starting with a game between R&F and South China at Sham Shui Po Sports Ground on Tuesday Nov 1, with South China taking the points with a 2-nil win courtesy of a 32nd minute Chan Siu Ki header, and a 36th minute Sean Tse finish.

Wednesday (Nov 2) saw a clash between BC Glory Sky and Eastern Long Lions at Mongkok Stadium, where a 13th minute strike by BC Glory Sky’s Rafael Perez past goalkeeper Yapp Hung-fai, elicited a very strong response from Eastern Long Lions. Manuel Rodriguez collected a hat-trick with finishes in the 14th, 20th and 28th minutes, whilst Diego Moreira headed in a cross from Miroslav Saric to add a 4th in the 33rd minute, and Manuel Rodriguez added his 4th from a Xu Deshuai through ball in the 45th minute for a 5-1 half time lead.

Although Everton Camargo pulled a goal back for BC Glory Sky in the 65th minute, Jaimes Mckee scored from a fast break in the 82nd minute for Eastern Long Lions to give them a final score 6-2 victory.

HKFC took on Lee Man Rangers on Friday Nov 4 at HKFC’s Sports Road ground, with the visitors claiming the 3 points courtesy of a 70th minute winner from Chiu Chun-kit after scoring from the rebound once Issey Maholo had saved Cheung Kin-fung’s free kick. The goal settled a tightly fought game of few chances.. The result leaves HKFC at the foot of the table on 3 points, the same as R&F, but having played 2 more games. .

Kitchee and Eastern Long Lions lead the table with 16 points, with South China 3rd on 11 points, all from 6 games.

Sun Hei lead the table with 25 points from 9 matches, with Wong Tai Sin second on 24 points, and Easyknit Property third on 20 points both from the same games..

Hoi King and Central&Western lead the table with 19 points from their 8 games.

In the seventh round of first division matches, GAS were 3-1 victors over Albion, Wanderers were 2-nil winners against KCC Dragons, French Kiss were 2-nil victors over Colloids FC, and Squadron won 2-nil against KCC Knights, whilst Baker Tilly Spartans face Swiss Xi on Wednesday night (Nov 9).

Wanderers lead the table with 19 points from 7 matches, with Colts second on 13 points.

Azzurri are league leaders with 19 points, Dynamo are 2nd with 14 points both from 7 games.