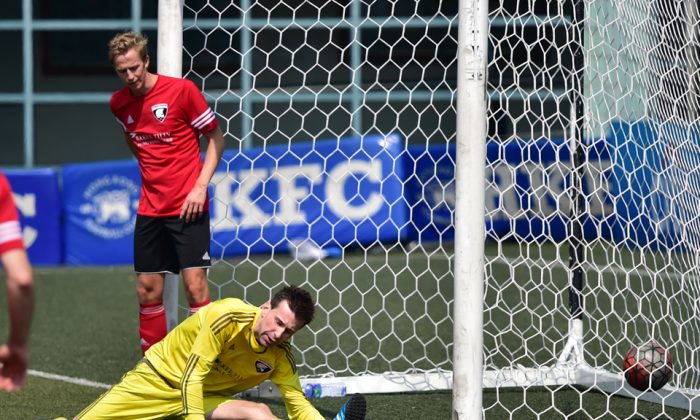 Baker Tilly Spartans' goalie is unable to stop this shot by Albion striker to give Albion a 2-0 lead in their Yau Yee League match at Sports Road on Sunday Feb 12, 2017. Albion went on to win the game 3-0. (Bill Cox/Epoch Times)
HK Football

HONG KONG—The only BOC Life Hong Kong Premier League game this week was on Thursday (Feb 9) night, with the game between Eastern Long Lions, looking to bolster their lead at the top of the table, and languishing R&F, looking to leave their relegation worries behind, at Mongkok Stadium,

Sun Hei lead the table with 41 points, with Wong Tai Sin second with 40 points both from 15 matches.

Central & Western lead the table with 30 points from 13 matches with Hoi King 2nd with 27 points from 12 games.

Happy Valley lead the table with 37 points, with Wing Go Fu Moon second with 35 points, and GFC Friends third with 34 points all from from the same matches.

In the fifteenth round of first division matches, leaders Wanderers drew 1-all with Squadron, Albion were 3-nil winners against Baker Tilly Spartans, Colts won 3-nil against Colloids, GAS drew 1-all with Swiss XI, and KCC Dragons won 2-nil against KCC Knights in their derby.

Wanderers lead the table with 35 points from 14 matches, with Colts 2nd with 34 points from the same games, and Albion 3rd with 31xpoints from 13 matches.

In the third division, University drew  2-all with HKSS, Darts were winners against HOB, Antonhill won against Friends of Barclays, Goal Visio drew 1-all with Scorpions, Maccabi HK won 10-nil against Outward Bound, and Power 22 were 1-nil victors over Yan Po .

Corinthians lead the table with 32 points from 14 matches, with Green Cypress FC second with 31 points from 13 games.